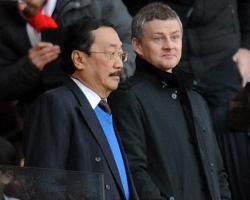 Solksjaer was left to rue Steven Caulker's point-blank header against the bar as Roberto Soldado's first goal in nine games condemned Cardiff to 1-0 defeat at Tottenham.

Cardiff owner Tan addressed Solskjaer's squad in a London hotel on Saturday night, for the first time since the Norwegian took charge in January.

Ex-Manchester United poacher Solskjaer believes that meeting with Tan can boost Cardiff's survival chances, despite the club sitting one place and one point off the foot of the table.

"I saw him last night, and he gave some encouraging words to the players and myself," said Solskjaer after Cardiff's seventh straight league loss on the road.

"It's the first time since I've been here, I think it was a good time.

"They were pleased to see he came

We all appreciated it."

Cardiff owner Tan has upset die-hard fans of the club by changing the home kit from the traditional blue to red, refusing again last week to reverse that decision as long as he remains in charge.

Former manager Malky Mackay's tenure came to an abrupt and disruptive end in January, with Tan launching accusations at the Scot's transfer policies that have rumbled on ever since.

The 62-year-old Malaysian businessman even accused the British media of being "a little bit racist" in a BBC interview last week, but was also at pains to dispel his Bond-villain image.

Now Solskjaer has lent his support to the Cardiff owner, calling on the club to unite to stave off the drop from English football's top flight.

Cardiff host basement club Fulham in south Wales on Saturday, desperate for a win to kick-start their final push for safety.

"We're all sticking in it together, that's the key," said Solskjaer.

This run-in, it needs every single one of us."

Despite Cardiff's battle for goals, Solskjaer backed his side to find the net sooner rather than later.

"I thought we caused them massive problems on the counter-attack," he said.

"We looked like a team again, a proper team that plays for each other.

"But we can talk all day long, we need to score goals, we need players to want to put the ball in the net.

"That's what we practise every single day, now it's about that need and urge to get on the end of crosses

I think we will do so very soon."