The Greatest Footballer You Never Saw 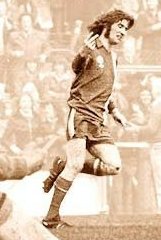 ...His name is Robin Friday.

A few years ago, while on tour with Oasis in America, former bass player Paul "Guigsy" McGuigan came across an article about this wild man from Acton in West London, who had ridiculous talent and a shockingly entertaining life.  A life of outrageous excess is soon to be celebrated on the big screen in THE GREATEST FOOTBALLER YOU NEVER SAW, based on the hit biography penned by McGuigan and celebrated author Paolo Hewitt - THE GREATEST FOOTBALLER YOU NEVER SAW: THE ROBIN FRIDAY STORY.

Robin Friday played professional football for just three years. But he wasn't only a footballer who scored the greatest goal that legendary international referee Clive Thomas ever witnessed. He became the all-time cult hero for the fans that adored him – fans who weren't corporate executives or lazy armchair experts, but rather the folk he lived and drank with on the working class streets of Reading and Cardiff . His story wasn't just one of spectacular goals and outrageous skill, it was a story of the Seventies – of bell-bottoms, LPs, interracial marriage, social struggle, drugs, sex and the Funky Chicken.

Now, multiple Emmy-winning and BAFTA winning producer Mike Young (creator of another cultural icon...Super Ted) has partnered with Paolo Hewitt and  Los Angeles-based British producers Marc Ambrose (Ambergreen Entertainment) and Marc Benardout and Julian Stone (Tasty Films) to bring this wild and brilliant story to the screen. And, with the generous and creative support of Film Agency for Wales , the screenplay for THE GREATEST FOOTBALLER YOU NEVER SAW has been written by Stone and Hewitt.

On making the announcement Paolo Hewitt commented “When I was writing the book with Guigsy all those years ago, I kept saying to him this would make such a great film. The fact that this is now happening is the proverbial dream come true. Spurs will win the Premiership at this rate.” Los Angeles based Mike Young said “I have been a life-long Cardiff City fan (and have the lines to prove it) and saw John Charles, Trevor Ford play but the firefly that was Robin Friday’s career was both breathtaking and sadly incredible to behold.

The project is funded by the multi-Emmy® and IFTA award winning studio Telegael, one of Europe’s leading animation and television production houses, Film Agency Wales and Mike Young, CEO of Moonscoop USA. An additional high profile financier is in final negotiations to be involved.

The ball is rolling...

Robin Friday lived a life of death or glory. After being impaled on a spike in a construction accident, he glimpsed death – and decided just to be brilliant and not give a damn. He dribbled mercurially through life – kissing policemen, shagging girls, breaking every social rule he tripped over. If football, as has been said, was the working man's ballet, then Robin was Nureyev. But he didn't dance to Tchaikovsky, he rock 'n' rolled through life like Keith Richards. Everyone said he had the world at his feet. But, hurtling through life at that pace, something had to break... and it did. It was his heart.

By then, though, he had taught the world that life is nothing if you don't live it.

Playing in an age before YouTube, little of his genius remains. The power of Robin’s legacy is in the myths and memories he left behind. So, with author Paolo Hewitt, Guigsy brought Robin back to us with The Greatest Footballer You Never Saw (a bookrepped by the same agency as Fifty Shades of Grey – Robin would have liked that!). Paolo has had a successful career, writing on British popular culture for iconic and essential publications like NME, Melody Maker and Vogue, but he could see that Robin was something special...

As Robin Friday walked down the streets of the Seventies, everyone wanted to be him. But, quite frankly, no one else had the balls...