The road to Wembley 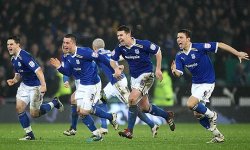 Cardiff had to overcome just one Premier League team on their road to Wembley. And it was against strugglers Blackburn. Liverpool won at Stoke, Chelsea and took Man City over two legs. Their first home game in the competition was the 2nd leg against Man City. They did have one less round to play though.