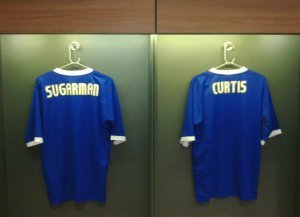 These meetings happen on a monthly basis and are usually staged either in the boardroom or in one of the adjoining conference rooms, but on this occasion the dozen or so travel reps were invited by club officials into the home dressing room, where replica shirts bearing each of their names were hanging up on the wall.

Chief Executive Alan Whiteley and manager Malky Mackay arrived shortly after 6:00pm, and Malky took the time to have a chat with each of the supporters before signing all of their replica shirts, which were later taken away by club staff to be embroidered with the details of the forthcoming Carling Cup final.

Cardiff City Stadium Manager Wayne Nash explained that the club's manager and officials had wanted to thank all of the Travel Group representatives for the work they do each season, which involves arranging transport for thousands of travelling Bluebirds supporters, liaising with club officials and the South Wales Police on a regular basis and sorting out the distribution of tickets to supporters who travel to away games on buses.

Malky Mackay opened the meeting by thanking all of the coach operators for their support. He said the welcome he and his staff have been given since their arrival in South Wales has been overwhelming and very much appreciated by all concerned. Malky spoke of how important the fans are to him and his players and likened City's supporters to those of Celtic in terms of their passion and enthusiasm for their club.

He said he feels the Cardiff City Stadium is fast becoming a fortress that opposition players don't want to visit and talked of how impressed he has been with the number of fans who travel away and how much noise they can generate during matches. Malky said he is certain the level of support the team is getting is having a positive effect on his players and added that he genuinely believes everyone involved with the club is pulling in the same direction, which is vital if the Bluebirds are going to continue to move forward.

Malky then took a few questions from the floor on subjects such as his attempts to sign players during the latest transfer window, the backing he is receiving from the directors and the routine he and his players undertake on a typical match day.

He said the club had been extremely close to agreeing a deal with Brighton for winger Craig Noone, but eventually the Albion chairman had pulled rank and vetoed the move. He also mentioned the club's hefty bid for Watford striker Marvin Sordell and said he is now ready to move into the loan market in order to strengthen the squad provided the right players are made available. Malky left everyone in no doubt that he has the full backing of the board, both on a local level and from Malaysia.

On the subject of new signing Kadeem Harris, Malky said the young winger has been purchased from Wycombe very much with a view to the future, although he will have no hesitation in playing him in the first team this season if he shows up well enough in training. Malky spoke of the progress that youngsters like Joe Mason, Joe Ralls and Rudy Gestede have made during the current campaign and said he hopes Kadeem Harris will follow the same path

Following the questions and answers session, Gwyn Davies read out a speech he had prepared on behalf of the travel reps in praise of the job the manager has done since his arrival at the club and it captured the mood of those present perfectly. Malky and Alan Whiteley then left the dressing room to a warm round of applause before the regular business of the meeting got underway.

The first issue to be discussed was the infamous Canton Stand drum. The drum has been used during the last three home matches, all of which have resulted in victories for the Bluebirds. The general consensus was that so far it has been a successful experiment and the atmosphere inside the stadium has been improving. Therefore, the trial will continue during the next few matches. Julian Jenkins revealed the club has received less than a dozen complaints about the drum, while he said there has been a lot of positive feedback from fans. He added that Canton Stand season ticket holders will be canvassed on their opinions in due course once the drum has been trialled over a reasonable period of time.

Wayne Nash revealed that ticket sales indicate Blackpool will bring between 600 and 800 supporters to Saturday's match, which has become a hugely important fixture for both clubs. Home ticket sales currently suggest the crowd will be around the 22,500 mark, but the club are hoping for another attendance of over 23,000.

The allocation for the Leicester City away game on Saturday 11th February will be a minimum of 2,000. So far, less than 400 tickets have been sold for this fixture, but that number is sure to rise dramatically next week.

The club is set to announce an initiative aimed at boosting the crowd for the Valentines Day home game against Peterborough United (Tuesday 14th February). That will be revealed on the official website in due course and there will also be an advertising campaign in the two main Cardiff train stations aimed at further improving home attendances for the remainder of the season.

West Ham United fans will be allocated 1,800 tickets for their trip to Cardiff on Sunday 4th March and they will be required to go through a voucher exchange system. Hammers officials have apparently requested that those restrictions be lifted, but Bluebirds officials have insisted that West Ham supporters be treated in the same way that City fans were when the return fixture was played at Upton Park in August.

Cardiff will be allocated 2,500 tickets for the midweek fixture at Brighton on Wednesday 7th March, while the game at Bristol City on Saturday 10th March will be a voucher exchange for Bluebirds fans.

Wayne Palmer revealed that just 21 Cardiff fans have been arrested at home and away matches so far this season and said that almost all of the arrests have been for minor offences. He praised the continuing improvement in the behaviour of the club's supporters and spoke of how much easier it is becoming for our local police officers and club officials to deal with their counterparts at other clubs as a result of the way in which our fans are conducting themselves.

Naturally enough, the main topic of discussion during the meeting was the Carling Cup final, although full details of the ticketing arrangements have already been posted on the club's official website so there is no need to repeat them here.

Wayne Nash explained that representatives from the club and the South Wales Police met with Wembley officials a few days ago as a part of the risk assessment process, and the behaviour of Cardiff fans during our three previous visits was praised by the stadium's staff and the Metropolitan Police commanders who are responsible for controlling matches at Wembley. The indications are that the stadium officials and the Met Police are significantly more concerned about the potential for problems from Liverpool supporters during the Carling Cup final than they are from ours, which is a positive sign of the times.

It was revealed that all of the public houses in the areas surrounding Wembley Stadium will be closed one hour before the kick-off. This measure is being put in place in an attempt to stop fans without tickets travelling to Wembley just to watch the game in pubs. The same steps were implemented before the recent Champions League final and were apparently a success.

Wayne Nash also revealed that the club has approached Wembley officials and requested that an area be set aside on the day of the final for the club and its fans to lay tributes to Bluebirds supporter Mikey Dye, who was tragically killed outside the stadium in September before the England v Wales international fixture. He said Wembley officials were receptive to the idea and are likely to come back to the club with some firm plans which will be announced in due course.

The meeting closed at approximately 8:10pm.