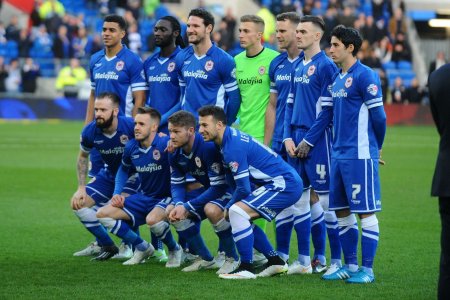 Russell Slade said: "It was an enormous result for us. It was just staying in control because it was a big day for the football club and not let the occasion get to the players.

"There's nothing worse than your own fans waiting to jump on the players the moment there's a moment of adversity.

"That's a huge difference when you've got the 12th man out there, keeping you going.

"If we can settle down and gain some momentum together, united again, it can only be good."

A game of few scoring chances was settled as early as the 14th minute when Morrison's header from an arching throw by Aron Gunnarsson had enough to cross the line despite a hand from Fulham goalkeeper Marcus Bettinelli.

Ross McCormack had Fulham's only chance but his free-kick was easily saved by Simon Moore, in for the injured David Marshall.

Defeat was a third in a row in the Championship for Kit Symon's Cottagers, who slip to 18th place.

He said: "It was always going to be hard for us coming here because that decision (over the colours) gave everyone at Cardiff City a lift. I came here two weeks ago to watch them against Watford and the atmosphere was very different.

"We had good possession but didn't create enough clear-cut opportunities for all the ball we had. We had excellent possession and good periods with the ball. We've got creative players and we made changes to bring on more creative players to get forward.

"But there are times when you need to be more speculative and get some shots in, rather than waiting and trying to score the perfect goal.

"We defended well apart from one long throw. We knew that would be a weapon for them given the size of some of their guys and they used it well. It caused us a few problems."