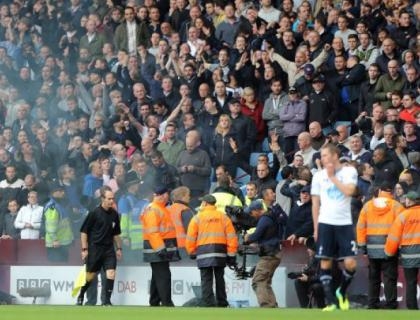 You have to go back to September 14 for Benteke's last strike, coming in a 2-1 home defeat to Newcastle, although the Belgium forward did spend a month on the sidelines with a hip injury sustained soon after.


Since returning to the team in a 2-0 home loss to Spurs on October 20, the 22-year-old has had his opportunities - including a penalty in a 2-0 defeat to Everton - but failed to find the net.


Benteke's form is symptomatic of a Villa side that have drawn a blank in five of their last six matches in all competitions, with the only game to buck that trend being a surprise 3-2 victory over Manchester City at Villa Park.


Lambert, though, is far from concerned as he said: "People have to remember Christian is still a young guy, still learning, and he has only just come back from injury.


"He's had chances against Everton and West Ham, so you can't label anything against him.


"I'd be more worried if he wasn't getting chances, but the thing is he is getting them, so I've no worries about him whatsoever.


"It's true what they say - you win together, you lose together, and Christian is part of the whole thing, along with everybody else."


However, there are 10 places and nine points between the two sides as Spurs have been stunning defensively, apart from their one aberration in losing 3-0 at home to West Ham.


Such statistics, however, underline the fine margins that exist, with Lambert adding: "It's highlighted more because of where they (Spurs) are.


"But the one thing you can never say about us is we don't give it a go because we try and create as much as we can.


"If we'd taken our chances against Everton we would have won it. We had a penalty and two one-v-one opportunities.


"If Christian's header had been an inch under the bar against West Ham, or Andi (Weimann) had gone on for his one-v-one chance, we win the game.


"So again, I'd be more worried if we weren't creating. But I know the lads will come good. We're not far away."


For Saturday's visit of Cardiff, fresh from their south Wales derby win over Swansea, Lambert is again bereft of several players through injury.


Andreas Weimann and Antonio Luna (both hamstring), Gabriel Agbonlahor (ankle) and Joe Bennett (back) are out, joining long-term casualties Charles N'Zogbia (Achilles), Gary Gardner (back) and Jores Okore (knee) on the sidelines.


The only bright spot for Lambert is Fabian Delph could return after missing last weekend's goalless draw at West Ham through illness.


Cardiff manager Malky Mackay must decide whether to tinker with his derby-winning line-up.


Mackay may opt to rest Craig Bellamy after the striker's exertions in the victory over Swansea and could also be tempted to restore Aron Gunnarsson to his side.


Mackay may have endured a torrid few weeks but the Scot insists he wants to remain in charge of Cardiff for the long-term.


The Scot's position at Cardiff City Stadium has been under scrutiny since his head of recruitment Iain Moody was removed from his role and replaced on an acting basis by Alisher Apsalyamov, a man with no known experience of top-level football.


Apsalyamov is not currently operating for the Bluebirds in an official capacity while his visa documentation is assessed by the Home Office.


Reports that Tan has attempted to interfere in on-field matters and bought striker Etien Velikonja without Mackay's approval have just added to the spotlight on the club and their manager.


But Mackay insists he is fully committed to the club.


"We are all working to ensure Cardiff City is again playing top-level football next season," he told a press conference.


"I want to be talking to the media in a year's time as Cardiff City manager in the Premier League.


"We relish being in the Premier League in terms of players and fans. Our aim is to be the best we can be and finish as high as we can.


"I am proud to be manager here. We have worked hard as a staff for two-and-a-half years to take our beliefs forward, mould our squad to the point we have reached now.


"We will keep moving forward and make sure everything we do is for the best of Cardiff City. I will always do my best and that will never change."