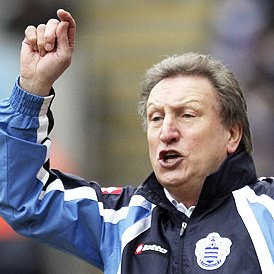 Rangers come to South Wales with one foot in the Premier league but a Cardiff victory would ask a question of their Championship credentials. City could be just five points behind QPR with three games to go.

Other results could play a significant part in what happens at the the CCS with Rangers going to be all but promoted before kick off if Norwich lose on Thursday and Reading fail to win on Friday. Rangers will know at 9.40pm on Friday night just what they need to do to if they can achieve promotion on the Saturday.

But Warnock thinks it's Cardiff who must win to fight off the chasing pack.

“Saturday is set up for a cracker," he said. "I like Cardiff and I love the Welsh but we’ll go there looking to win – and there will be a few other Championship clubs cheering for us too.

“But we’ve just got to worry about ourselves and getting as many points as we can between now and the end of the season.

“And it’s good we’re playing a team who will want to have a go at us – you look at their forward line and there’s no chance they’ll put 10 men behind the ball looking for a point.

“And, if I’m honest, I think they will have to beat us with Reading and Norwich breathing down their necks.”