Two signings, two departures and two games to talk about this week. Starting with the departures, it was a shame to have it confirmed that the Academy Manager post the club invited applications for this week was to find a replacement for David Hughes, the former City centreback  who joined the club late in 2020 as Head of Academy. Hughes took over the manager job when James McCarthy departed and is leaving to pursue an “exciting new challenge”, but he has agreed to stay on with City until his replacement has been found. As I mentioned, it seems to be bad news for City because Hughes appears to be universally well regarded, but I thank him for being in charge during the time when City’s Academy became more relevant than it had been in years and hope his new job goes well. 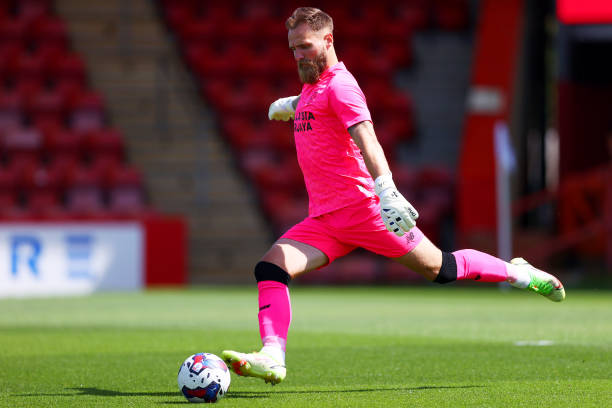 Also leaving us this week is the scorer of our first goal of 22/23 James Collins, who netted ten minutes into last weekend’s match with Cambridge United. Colllins has joined Derby County on a free transfer half way through his two year contract with us having struggled to make an impact last season.

Although the majority of Collins’ career has been spent in the lower divisions, his record in the Championship during his last two seasons at Luton suggested he’d score more than the three headers, all away from home, he came up with for us.

Unfortunately, Collins could not claim that he just wasn’t having chances made for him at Cardiff, because there was a series of poor misses in those autumn months when the side was struggling so much that meant he really should have been able to at least double his goal tally.

The way Collins was almost completely airbrushed out of the first team squad once we’d signed Jordan Hugill and Uche Ikpeazu offered a strong suggestion that his days at the club were numbered, but those two players I mentioned are gone now and we’re desperately short of strikers at the moment – letting Collins go at this time suggests we have replacements lined up, despite the local media informing us that a signing in the striking department isn’t imminent.

So, best wishes to James Collins at Derby and a warm welcome to Cedric Kipre and welcome back to Sheyi Ojo. Kipre is a centreback who joins on a season long loan from West Brom. Paris born Kipre is qualified to play for the Ivory Coast and has an Under 23 cap for them. His first club was Leicester, but the only first team football he played before he left at the age of 21 in 2017 was for Corby Town while on loan. Kipre made a big impression at his next club Motherwell though and twice extended his initial one year contract with them despite him only being there for a year.

Wigan agreed a fee with Motherwell for Kipre and he signed a three year deal with them in 2018. He made thirty eight league appearances in 18/19 for his new team as they consolidated in the Championship following a promotion and, almost as many again the following season when they were relegated.

West Brom were impressed enough though to sign Kipre on a four year deal in 2020, but he only played three times for them in cup competitions during their 20/21 campaign in the Premier League being loaned to Belgian side Charleroi in early 2021.

Back in the Championship for 21/22, Valerien Ishmael used Kipre quite a lot while he was at West Brom and he was in their side for the 1-1 draw against us at the Hawthorns just after Christmas.

New West Brom boss Steve Bruce wasn’t as much of a fan of Kipre as Ishmael was though and it seems he was regarded as fifth choice centreback at the club for this season, so it’s not a surprise that he was available on loan.

Apparently, Kipre is a tough defender with a decent turn of speed who is adept at playing the ball out from the back. Unfortunately, he is right footed (left footed central defenders are akin to gold dust these days!) and his disciplinary record could definitely be better, but, having researched him now, his CV is a bit better than I thought it was. So, we’ll be going into the new season with a younger, more mobile, defence which it would appear will be better at passing out from the back, but probably not as strong in the air and so our set piece threat will be diminished.

Sheyi Ojo joins us on a two year deal following his release by Liverpool. An inconsistent member of an inconsistent City team while on loan through the 20/21 campaign, Ojo scored memorable goals on the break for us to help win games at Preston and Rotherham and there were three others plus seven assists – I wouldn’t say Ojo set the world on fire while he was here, but we certainly could have done with him last season. Instead, Ojo was at Millwall on his latest, and last, loan from Liverpool. Apparently, Ojo made an impressive start at the New Den while often playing in a number ten type role before injury curtailed his progress and there was no way back into the team when he was fit again.

So, with a centreback and wide player in, our recruitment must be close to complete even though Kipre is our first loan signing, but, as mentioned earlier, there is still a glaring absence of strikers and we, surely, need one, preferably two, of them in before we face Norwich in a fortnight.

On Tuesday evening, City faced Newport County at Leckwith. Although it became a ninety minute encounter at City’s request, rather than the originally planned two one hour games, there was not one player on the pitch in the ninetieth minute who was there when the game started.

County completely changed their team at half time, while City switched their back four (it’s looking very like that’s how we’ll be lining up when the season starts) and keeper before completely changing their midfield and attack around the hour mark.

Strangely, County’s first half team finished at 0-0 despite being on the back foot throughout the forty five minutes. City played some very easy on the eye stuff with centrebacks Perry Ng and Ollie Denham and keeper Ryan Allsop (apart from one incident in the second half when he almost got caught out) using the ball in a manner City fans are just not used to. With Ryan Wintle and Eli King dovetailing well and Ollie Tanner retaining the skills he showed against Cambridge while using the ball better, there was much to admire, but, apart from when Ng headed against the post early on from a Wintle corner and keeper Nick Townsend made a fine save to deny Tom Sang, there wasn’t a great deal of goalmouth action.

On seventy seven minutes, Crole was played into space down the left and kept his head to put over a low cross from the bye line which the sliding Whyte knocked in from six yards. Three minutes later, Whyte returned the compliment after a Newport move broke down enabling a counter attack which saw Whyte slide a well timed pass through to Crole who hit a powerful shot past former City keeper Joe Day from the corner of the penalty area to seal a 2-0 win which was deserved on the balance of play despite the more even second half.

The second match has just finished at Cheltenham Town where City maintained their one hundred per cent winning record when Max Watters’ eighty eighth minute winner completed a comeback 2-1 victory after they’d trailed by a goal at the break.

This time City’s starting eleven played the first hour before they all made way for a team which included Kipre, Joe Ralls, Romaine Sawyers, Ojo and Callum O’Dowda who were all making their first pre season appearances.

Cheltenham also made lots of changes but they were spread throughout the game on a hot afternoon that, undoubtedly, took its toll on energy levels, hence there was a slower pace than I’m guessing Steve Morison would be best pleased with if it had happened on a wet October afternoon.

Jak Alnwick began the game in goal with Mahlon Romeo and Jamilu Collins at full back and Mark McGuiness and Curtis Nelson paired at centre back as on Tuesday, while the Eli King/Ryan Wintle/Mark Sang triumvirate were in midfield with Mark Harris leading the line supported up front by Gavin Whyte and Jack Leahy.

I was greeted by a server problem page when I tried to log in on the club website to watch the game and around half an hour had been played by the time I was able to access the stream. It was 0-0 when I started getting pictures and, if the first ten minutes I saw was an indicator of what had gone before, it was no wonder the match was still scoreless, but the last five minutes before the break were much more lively as the deadlock was broken.

Cheltenham took the lead with a goal which had me recalling the bad days of last season as it was such a cheap one to concede. First of all, Mark McGuinness gave away a needless free kick thirty five yards from goal and he was one of three in blue who were stood arguing the toss with Premier League ref Simon Hooper as the home side quickly restarted play and Liam Sercombe cut inside to beat Alnwick from ten yards – if this had been a one off, it would have been easier to have sympathy with the City defence, but Cheltenham had restarted the match quickly from a free kick in a similar position only a few minutes earlier..

Leahy almost profited from Cheltenham conceding possession inside their own half a minute or two later, but was unlucky to see his shot from twenty five yards rebound back off the crossbar with goalkeeper Shaun McDonald seeming to get a touch on the ball and so City went in for half time a goal behind.

In truth, there was little in the minutes after the restart to suggest City could get back on terms as their starting eleven laboured in the sun, but with the replacement team lined up on the touchline ready to come on, a good ball from half way by Wintle was chased by Harris who appeared to be brought down by a combination of defender and keeper and Mr Hooper pointed to the spot.

Harris sent McDonald the wrong way to equalise and with an eleven with many probable first team starters on now, City looked well placed to press on and win. There were some nice moves from the new team, but, apart from a cross by Joel Bagan that Watters headed weakly at McDonald and an angled drive by the assured Sawyers that McDonald turned around the post for a corner, it looked like a stalemate until Kipre challenged for another Bagan cross and his header dropped to Watters who half volleyed in fiercely and instantly from twelve yards to win the game.

One other snippet of news, with the equivalent competition involving Premier League clubs having decided to change to an under 21 level from under 23, City have made the same decision for the coming season and so it was their under 21 side that began their pre season program at Carmarthen last night where they were beaten by a single goal to nil.