Friday 9 May was the day the South Wales Echo nailed it’s colours to the anti red mast.  This editorial called for a return to blue, the paper had also set up an online petition where supporters could back the claim for a return to our traditional kit and there was even a free “We’ll always be blue” poster for people to take to Sunday’s final match of the season against Chelsea to display at the time of the 19.27 protest which has now become the norm at every first team game.

For a few hours, the Echo’s decision was the talk of the messageboards with some claiming the paper’s change of heart came two years too late and others prepared to welcome the latest convert to the anti rebrand cause, but all of that was to change around lunchtime as a new story emerged which pulled off the almost unheard of trick of making the morning’s hot story yesterday’s news by the afternoon – if you get what I mean!

I’d heard the view that Malky Mackay’s claim for compensation against the club after his sacking, which was due to be heard in July I believe, would never reach court because there would be a settlement between the parties before then. I agreed with this opinion, but, even so, it still came as a complete shock to learn, via a statement released by our former manager’s lawyers, that the case has been dropped – with this bit especially taken the eye.

“‘If I have caused any offence to anyone during this time, especially to Vincent Tan, then I apologise without reservation.”

This sense of surprise grew a few hours later when the Daily Mail (the paper that has usually got things right in the last year or so when it comes to Cardiff City matters) claimed that Mr Mackay would “receive nothing as part of an out-of-court settlement and will pay his own legal fees”. It did not end there either, Iain Moody (who was pursuing a similar claim to Mackay) was reported to have reached a settlement with the club as well and there was also a similarly worded apology to our owner included in his statement.

With there having been persistent rumours circulating since Moody left the club about dodgy dealings regarding the Andreas Cornelius transfer in particular, there were those who concluded that the lack of compensation paid to the ex employees of the club and the wording used by Messrs Mackay and Moody offered confirmation that there was some substance to the gossip. Others were not convinced as the Daily Mail’s claims were rubbished and the possibility of Mackay being appointed manager at Norwich (or even West Ham where Sam Allardyce’s future is in some doubt) was raised as a reason why our former manager might be in a hurry to get a settlement. 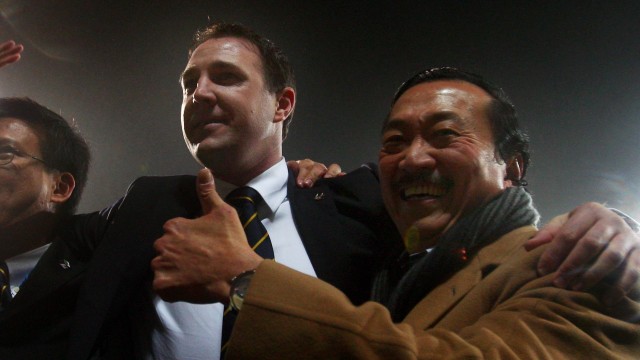 In happier times. Malky Mackay and Vincent Tan celebrate after the 2012 League Cup Semi Final win over Crystal Palace – hopefully, yesterday’s news really does signal an end to a dispute that blighted the 2013/14 season.

What I’ll say on the matter is that, to my non expert eyes at least, it seems to me that Messrs Mackay and Moody do not come out of this looking that good.  Now, it needs to be said that, as far as I’m aware, the club have only ever said there was an overspend (in the region of £15 million) on last summer’s transfer dealings – no other public allegations have been made. Mackay and Moody responded to the overspend claims by denying that this was the case – indeed, Mr Moody maintained their summer spending had been £4 million under the agreed budget in this article.

Is Mackay’s apology to Vincent Tan in particular for possibly causing offence and Moody’s reference to his part in any mistakes made at the club during his time at Cardiff an admission of guilt on their part with regards to those rumours I mentioned earlier? Well, I’d say it might be reasonable to conclude that Vincent Tan’s claims regarding the transfer overspend might have some truth to them based on yesterday’s statements, but I certainly wouldn’t take it any further than that on the evidence we have at the moment.

Let’s not forget either that just because the Daily Mail has been right about Cardiff City in the past, it doesn’t automatically follow that they are this time and I see the Daily Telegraph  has a different take on things today with it’s mention of the parties “having reached a financial settlement that is not believed to include any compensation.”.

While the apologies of the two men were the most eye catching parts of the statements, I believe another very important part of them both are the references to settlement agreements. On the face of it a “settlement agreement” is a self explanatory term and  I’ll admit that, in these circumstances, I assumed that it would include some sort of financial arrangement. As it turns out though, “settlement arrangement” isn’t some sort of arbitrary term that has been plucked out of the air, it is a recognised part of arbitration procedure. Indeed, ACAS has produced guidelines onsettlement agreements which may have some relevance to this case – parts that took my eye include;

“They usually include some form of payment to the employee…”

Perhaps someone better qualified than me can confirm or deny whether that last bit means that once the parties decided to go down the settlement agreement route, the issues at the heart of their dispute were never going to form part of any subsequent hearing?

Trying to read between the lines, it seems to me that one party received legal advice that they stood very little chance of winning their claim on the evidence to hand and the other insisted on certain conditions being included before they would put their name to the legal document which would signal an end to the dispute. Under these terms, the employee(s) would, almost certainly, have to settle for less compensation (or possibly none at all).

Does this all mean that Mackay and Moody did overspend on the agreed transfer budget? No, I don’t think it’s conclusive proof that they did, but, as I mentioned before, it now seems to me to be reasonable to believe that the Tan version of events (£15 million overspend) is more likely to be correct than the Mackay/Moody one (£4 million underspend).

However, something else that was mentioned at the height of the dispute last autumn was that the club had signed off on all of the transfers which had resulted in the alleged overspend. I have said before on here that I struggle to understand how the club’s administrative staff could have agreed to the Theophile-Catherine and Odemwingie transfers at the end of August/early September having already given the okay to the controversial Cornelius transfer and the huge, by Cardiff standards, Caulker and Medel deals that followed it – a good proportion of the overspend could have been avoided if someone had realised that transfer spending was already over the budget set by the club.

If, as yesterday’s news would suggest, Mackay and Moody messed up, then this doesn’t alter the fact that others did in the episode as well – the more you learn about Cardiff City during 2013/14, the more you struggle to find anyone who carried out their duties to a satisfactory level.