Whittingham too good for Wolves 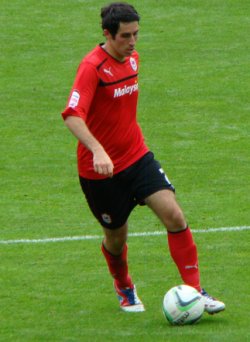 The game provided great entertainment right from the start. The opening 5 minutes saw chances at both ends but as the 10 min mark approached Wolves took the lead.

As everyone expected a cross into the box Bakary Sako managed to catch everyone out and guide a free kick past Marshall at his near post. Embarrassing for the keeper.

Less than 2 mins later City were level. Peter Whittingham (pictured) hooked the ball to Craig Noone and the livewire on his debut drew a foul from Ronald Zubar who gave away the most obvious of fouls in the box.

Peter Whittingham rolled his spot kick into the midddle of the goal.

Barely a few minutes later City were ahead. Nicky Maynard broke down the right, his cross was stepped over and Whittingham smacked the ball past the Wolves keeper from 20 yards.

The game had enough incident to keep your attention with much of the entertainment from Andy D'Urso who made some bizarre decisions for and against both sides.

Woves looked like they could be great or dreadful every few seconds. Quite a strange side who were over-run on a regular basis but still had a threat going forward.

Their team included City old boy Roger Johnson (who was given a great reception) and the lardy arsed Sylvan Ebanks Blake who took some fearful stick for his portly stature.

Craig Noone, and Nicky Maynard made impressive debuts. Kevin McNaughton played a blinder and new signing Tommy Smith was efficient and a quality addition to Malky's squad.

Peter Whittingham saw one free kick saved by Carl Ikeme but soon after the Wolves stopper could do nothing as Whittingham produced a free kick from the top drawer to secure his hat-trick and a 3 - 1 lead that was good enough for all three points.

It was great to see a City side with pace in attack and quality in all areas.

The win sees the club jump 11 places in the table to 8th.