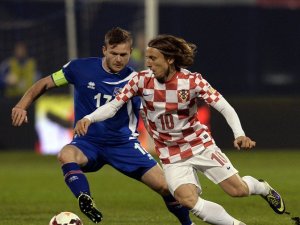 The World Cup dream is over for Aron Gunnarsson and Iceland.

After taking a 1 - 0 lead Croatia were reduced to 10 men when scorer Mario Mandzukic was sent off.

But it didn't stop the home side from scoring a second and to be honest they could have scored several more as they counter attacked time and time again only to find the Icelandic keeper in the way.

Still an incredible achievement for Iceland to go so close.

Elsewhere David Marshall kept a clean sheet as Scotland beat Norway 1 - 0 in Molde. That's a second consecutive shut out for Marshall after the 0 - 0 draw with the USA last Friday.

Loanee Craig Conway played most of the second half in Norway.

In the early hours of Wednesday morning Gary Medel starts for Chile as they face Brazil in Canada.