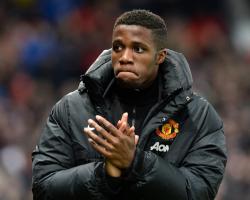 Zaha, 21, is the most high profile of his acquisitions, although it has taken longer to conclude the deal than had been expected.

Solskjaer said: "That signing should be done by now

His name is on the paperwork

He is a Cardiff player.

"He has pace, power, technical ability and goes past people

He will give us that extra change of tempo in the final third, where we really need it.

"He will bring that little final bit to find pockets of space and produce a bit of magic."

But the Norwegian does not believe Zaha has anything to prove, despite his limited opportunities since moving to Old Trafford from Crystal Palace.

"I don't think he has something to prove, he wants to play," said the former Red Devils striker.

"He played a few games at United, but maybe not what he hoped for when he went there.

"He wants to play, to play with confidence and keep Cardiff in the Premier League."

Solskjaer also confirmed striker Andreas Cornelius, signed for £8million by Mackay last summer, is in talks over a return to FC Copenhagen.

He said: "Andreas is speaking to Copenhagen, it is not 100 per cent done yet

We will confirm when it happens.

"He has had a hard time, he came here with big potential, he is a young kid and young kids are not the ones you expect to carry a team

He is a young man who will play a lot of good football in his career."

Solskjaer had previously stated the signing of Zaha would be his last of the transfer window.

But, while remaining coy on a move for Lazio defender Michael Ciani, Solskjaer acknowledged he could yet do more business.

"The phone is always ringing and you have got to be polite as you never know what may be possible, although we are probably done with signings

There may be players going out, there are a few things that need to be concluded today," he said.

Of Ciani he added: "I can't tell you who I have looked at as it's a very big list with the preferred options I looked at, although some haven't gone through

But I cannot confirm or deny that one out of respect to the player and the club."