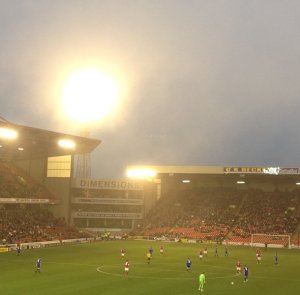 Cardiff, who went to the summit after Crystal Palace failed to win at Leeds, controlled the majority of play and took the lead when Ben Nugent headed home his first career goal in the 22nd minute.

They doubled their lead six minutes into the second half when they enjoyed more success at a set-piece, with Aron Gunnarsson nodding in another Peter Whittingham delivery.

The win, which came despite a late dismissal for Simon Lappin, ended Cardiff's poor away run. It was their first victory in seven games on the road and an automatic promotion challenge looks on the cards for Malky Mackay's side.

In contrast, things could not be going worse for Barnsley, though they did at least make a game of it when Jacob Mellis tucked home from close range in the final 15 minutes.

But they are now winless in seven and without a home win since September 1, with a gloomy winter beckoning at Oakwell.

Indeed, Reds fans have been starved of success since their 5-0 win at Birmingham in September, winning just one of their next 11 games and boss Keith Hill had a busy week trying to reverse his side's fortunes, bringing in Jonathan Greening, Akos Buzsaky and Emile Sinclair on loan.

There was only room for Greening in Hill's starting XI, though, while Cardiff handed a debut to Lappin, who arrived from Norwich before the loan deadline.

The Reds started well, with Greening's intricate passing fitting in with their style and he was involved in a nice move that saw Scott Golbourne cross for Craig Davies, but the striker fired over from eight yards.

But that early chance did not prove a catalyst for a dominant performance from the hosts and, as the mist descended on Oakwell, Cardiff began to take control.

After a spell of three chances in two minutes they went ahead midway through the first half.

First Greening was dispossessed in a dangerous position by Craig Noone, but his shot went just wide of the post and a minute later Craig Mason was set free only to be denied by a fingertip save from Luke Steele.

But from the resulting corner Nugent got in front of his marker and powered Peter Whittingham's delivery home.

Barnsley tried to respond before the break, but Matt Done mis-kicked his shot when picked out by Marcus Tudgay and then David Marshall produced a fine low save from Davies' fierce effort from just inside the 18-yard box.

Hill's men continued their momentum into the opening moments of the second period and Marshall again had to be alert to deny Mellis before they had a real let off at the other end.

Martin Cranie was caught dawdling on the ball in his own area, Mason stole it off him and pulled it back to Heidar Helguson, but Steele somehow pulled off a miraculous save as he flung himself across goal.

But Steele's heroics were in vain as an unmarked Gunnarsson headed home the corner to give Mackay's side breathing space.

It could have got worse had Steele not kept out Rudy Gestede's palm-stinger and Kim Bo-kyung dragged the rebound wide.

Barnsley did at least make a game of it when Mellis converted Scott Wiseman's deep cross in the 76th minute, but, despite Cardiff going down to 10 men and a late flurry, they could not find a leveller.