A four-goal thriller at Barnsley finished 2-2 as Mick McCarthy's Cardiff fought back from being two goals down at Oakwell. 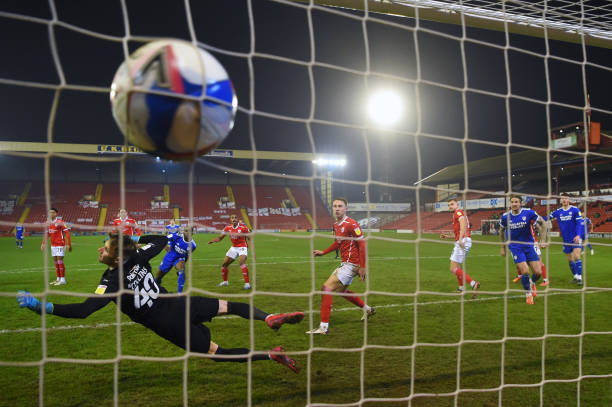 Ahead at the break courtesy of a Mads Andersen header, the Tykes doubled their lead after the interval as Cauley Woodrow scored from an Alex Mowatt free-kick.

Sheyi Ojo then pulled one back for the Bluebirds just before the hour mark. Kieffer Moore followed and equalised for Cardiff from a free header with a little over 20 minutes to go.

The Barnsley line-up remained unchanged from the side who beat Norwich in the FA Cup at the weekend.

Newly appointed City manager McCarthy made four changes from the team who lost to QPR last week. Joel Bagan replaced Joe Bennett and Junior Hoilett came in for Max Watters, with Aden Flint and Ojo preferred to Sean Morrison and Harry Wilson who were both dropped to the bench.

Barnsley thought they had broken the deadlock early in the eighth minute. The Tykes scrambled the ball over the line but referee Andy Woolmer awarded a foul for a shove on Cardiff goalkeeper Alex Smithies.

A game of few chances in the opening exchanges, Andersen headed the hosts ahead in the 19th minute. Latching onto a Dominik Frieser cross, the Dane scored his first Barnsley goal.

The visitors looked to respond in the 22nd minute. Perry Ng tried for an equaliser but unsuccessfully as his shot was blocked by Mowatt and his Bluebirds team-mate Will Vaulks was unable to turn in the rebound.

Hoilett followed with a chance down the other end. The Cardiff striker met Voulks' cross but could only direct his effort off target as he headed over in the 40th minute.

Cardiff made the first change of the evening at Oakwell when Josh Murphy replaced Hoilett in the 50th minute.

Barnsley doubled their lead shortly after the interval. Woodrow scored his first goal of the year as he headed home from a Mowatt free-kick in the 52nd minute.

Ojo pulled one back for Cardiff in the 57th minute. The winger tapped home from a Murphy cross as Cardiff brought the game to the side from South Yorkshire.

Barnsley goalkeeper Brad Collins was forced into making a quick save as he denied a Moore header from close range in the 59th minute.

Moore soon equalised for the side from South Wales by scoring from a free header, the former Barnsley forward levelling for Cardiff as he met a Joe Ralls cross.

Callum Styles had the last real attempt of the match but the Barnsley midfielder could only volley high and wide at the back post in stoppage time.