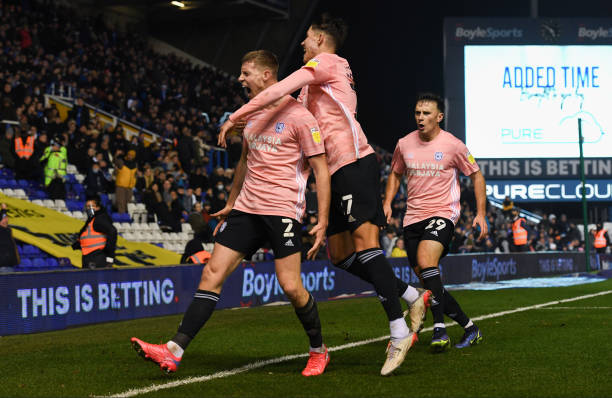 Steve Morison's side have made a habit of coming from behind to gain a result this term and they were at it again when McGuinness rose to head in from a corner in stoppage time and stun the home fans among a seasonal high crowd of 17,840.

Birmingham had built up a two-goal buffer by half-time, with Troy Deeney's second goal in as many games putting Lee Bowyer's side in front after 29 minutes.

And when Ivan Sunjic ended a 17-month goal drought to double the hosts' lead in the opening minute of first-half stoppage-time, it looked like the points would be staying in Birmingham.

But Moore took his name to the top of Cardiff's goalscoring charts to reduce the deficit in the 66th minute and missed a good chance to level, before McGuinness's late intervention restored parity and a deserved draw for the visitors.

It was Cardiff that started the brighter of the two teams. James Collins' dangerous third-minute cross was met by the outstretched toe of Moore, but from six yards the striker's shot bounced up and over.

Birmingham's first effort arrived after 14 minutes, with Sunjic satisfying the home fans' cry to "shoot" when a clearance rolled into his path 25 yards out and the Serbian's low drive deflected narrowly wide of Alex Smithies' right-hand post.

The visitors mounted more pressure and Ryan Giles teed up Moore just inside the area, but his curling effort was well blocked by Sunjic.

It was against the run of play that Deeney opened the scoring, coolly slotting the ball past Cardiff keeper Smithies into the bottom left corner of the net.

In the final minute of the half, Kristian Pedersen's close-range header flew narrowly over from Riley McGree's corner, but the midfielder did not have to wait too long to claim his second assist of the game, centring for Sunjic to convert past Smithies from close range.

Five minutes into the second half, only a last-ditch block by McGuinness prevented McGree from extending Birmingham's advantage.

The game opened up with chances being created by both teams. Deeney's header bounced narrowly wide and McGree drilled a shot wide, while Rubin Colwill and Isaak Davies both had shots kept out by Matija Sarkic.

Cardiff played the better football for much of the game, but it was a direct approach that helped the visitors pull a goal back.

A long punt upfield and a fortunate deflection off substitute Mark Harris provided Moore with a sight of the target. The Wales international drilled a low shot past a surprised Sarkic for his fifth goal of the season.

Smithies turned Jordan Graham's 25-yard free-kick around the post, while at the other end Moore's low shot was easily collected by Sarkic.

Home substitute Chuks Aneke nearly made a dramatic impact just moments after coming on, but his shot bounced just past the post.

Moore could have rescued a point for his side with four minutes remaining, the striker swivelling inside the six-yard box but skying his effort well over the bar.