Kenneth Zohore had volleyed in his seventh goal in eight games with six first-half minutes remaining to raise the prospect of Rovers losing for the first time in Mowbray's fourth game in charge. 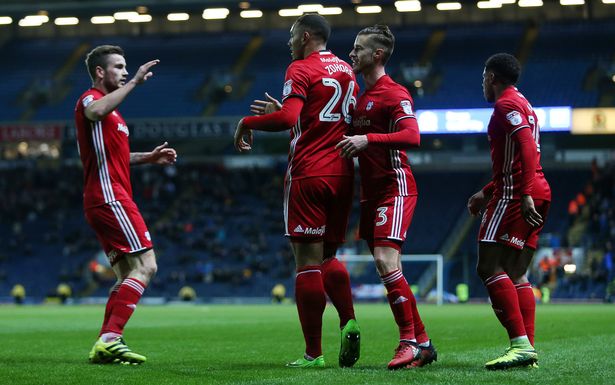 However, Williams kept his cool at the death to slam home from close range and keep them two points above the Championship drop zone with 11 games to play.

Cardiff boss Neil Warnock had written off the Bluebirds' play-off chances at the weekend and it was relegation-threatened Rovers who entered the contest more desperate for the three points.

They had not won three successive games since 2014 but had maintained momentum under Mowbray and were chasing a third home victory in only eight days.

Such form had bred confidence and the hosts started brightly with Williams firing wide and Sam Gallagher going even closer after rolling marker Sol Bamba.

The 21-year-old Southampton loanee may be the difference between Blackburn staying up or not and he almost had his 12th of the campaign when he met Charlie Mulgrew's free-kick with a volley that came off the crossbar.

There had been little Cardiff threat until Zohore struck the top of the woodwork himself with a hooked volley from a long throw the hosts could not clear.

And Zohore would not be denied two minutes later when he was unmarked to meet a cross from ex-Rovers winger Junior Hoilett that he steered in at the back post.

It was a lead that the Bluebirds would defend with spirit either side of the interval as Sean Morrison made a sliding block to rob Williams in the box before Jazz Richards cleared Liam Feeney's header off the line.

Gallagher picked up an injury problem and was replaced just before the hour by Danny Graham, whose vicious hit from 30 yards flew just past Allan McGregor's post.

Another Richards intervention prevented what would surely have been a certain Blackburn equaliser as he read Marvin Emnes' cross before his former Swansea colleague Graham could.

Blackburn continued to press and substitute Connor Mahoney's corner was headed wide by Richards once more as he held off Hope Akpan.

There was still time for a leveller, though, with Williams stealing in at the back post to control Mahoney's right-wing cross and keep his balance despite a challenge from Morrison to apply the finish past McGregor.