Ben Brereton Diaz scored his first hat-trick for Blackburn in a 5-1 demolition of Cardiff in the Sky Bet Championship at Ewood Park. 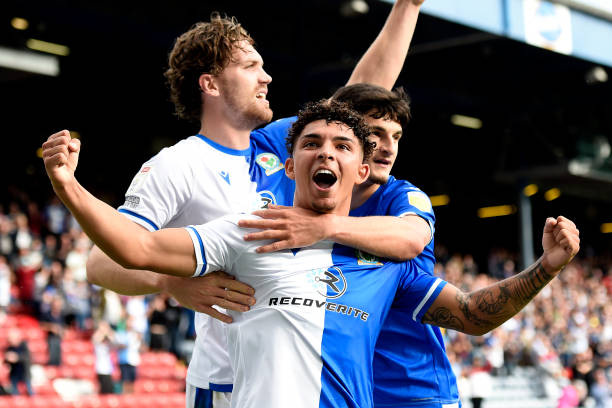 The Chilean was the standout performer in an afternoon when Rovers were comprehensively the better side, set on their way in a ruthless first half that yielded three goals.

A composed finish by Sam Gallagher broke the deadlock before Brereton Diaz's first-half double, which could not have been more contrasting. His sumptuous volley just after the half-hour doubled the advantage before he bundled home the third in added time at the end of the first 45 minutes.

However, Brereton Diaz notched his hat-trick at the end from the penalty spot to make it seven goals for the campaign - equalling his tally for last season.

Rovers remain in the top six after a fifth game without defeat, but were helped by a shocking display from Mick McCarthy's men, who succumbed to their third successive defeat.

Gallagher and Brereton Diaz went close early on but Rovers were indebted to Ryan Nyambe, who cleared Morrison's header off the line after the defender reacted quickest to Thomas Kaminski's initial save from Aden Flint.

Rovers went in front after 24 minutes when Gallagher beat the offside trap to latch onto John Buckley's pass, before controlling instantly and calmly slotting beyond Dillon Phillips.

It was almost 2-0 in the 30th minute when Daniel Ayala's thumping header cannoned off the woodwork. However, the hosts did not have to wait long to double the advantage as two minutes later Dolan's inch-perfect cross was met by Brereton Diaz, who volleyed emphatically into the bottom left corner.

Gallagher fired wide soon after but the third came in the second minute of stoppage-time and it was a comedy of errors as Brereton Diaz was inadvertently played in by Will Vaulks. The striker's mishit shot squirmed under Phillips but Curtis Nelson's attempted clearance hit the Chilean forward and bounced in from close range.

The Cardiff supporters could not contain their anger at half-time and McCarthy rang the changes - but the visitors conceded a fourth soon in the 53rd minute when Brereton Diaz's searching cross was beautifully cushioned by Gallagher for the onrushing Dolan, who took a touch before slotting beyond Phillips.

The shell-shocked visitors got themselves on the scoresheet five minutes later when Morrison found space to glance his second of the season into the far corner from six yards.

Although Kaminski had to tip over from Mark Harris, it was Rovers who added to their tally in the 90th minute when Phillips brought down Reda Khadra and Brereton Diaz placed his penalty into the bottom corner to round off a satisfying afternoon.