A dominant display by Cardiff City saw them earn a 2-0 win at Bloomfield Road against newly-promoted Blackpool. 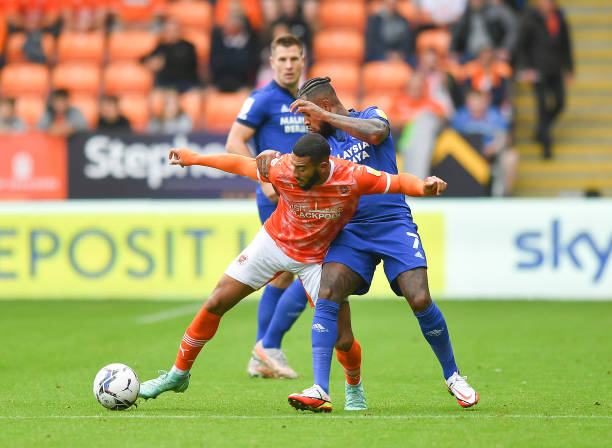 Leandro Bacuna headed Cardiff ahead on 52 minutes as Blackpool failed to deal with a long throw from the Bluebirds.

Cardiff had dominated the first half but failed to beat Chris Maxwell in the home goal who made several saves.

Blackpool barely threatened until the latter stages but they were hit on the break with four minutes remaining as Kieffer Moore headed home a second.

The hosts hit the woodwork late on, but could have no complaints with the result in a contest Cardiff might have had won before the interval.

Both sides were looking to build on hard earned 1-1 draws in their opening league fixtures, with Cardiff held at home against Barnsley, while Blackpool's Shayne Lavery scored a 93rd-minute equaliser against Bristol City as the Tangerines marked their return to the Championship after a six-year absence.

A lively atmosphere led to a fast start at Bloomfield Road and Cardiff had three good chances to take the lead inside 15 minutes, but Welsh goalkeeper Maxwell saved smartly to deny Aden Flint's header before producing a stunning stop when Ryan Giles raced clear.

The Bluebirds kept pushing and Flint's acrobatic volley was within inches of producing the opener on 14 minutes, but the ball struck the crossbar.

Cardiff continued to fail to make their physical dominance pay as James Collins - with last season's top scorer Moore remaining on the bench after a bout of coronavirus - saw two headers saved before Maxwell denied Giles' 30-yard cross from creeping in.

Blackpool were enjoying plenty of possession but all the chances were Cardiff's with Collins heading wide from close-range on 38 minutes after Flint headed back Giles' cross.

The 2,000 Cardiff fans would have been frustrated at the missed chances and those frustrations were almost compounded on 42 minutes, but Jerry Yates dragged his shot wide from a rare Blackpool attack.

However, Cardiff opened the scoring with their first chance after the interval when Sean Morrison flicked-on Marlon Pack's long throw and Bacuna headed home from close range.

Bacuna had been as guilty as any player in spurning chances in Cardiff's season opener and the Bluebirds were almost pegged back - as they were a week ago - when Blackpool broke at pace, but substitute Josh Bowler cut inside and fired over.

Morrison then volleyed wide before the hosts almost made Cardiff rue their misses when Grant Ward's long range blast was brilliantly tipped over by Dillion Phillips who also denied Yates' curler.

However, the Seasiders were then hit on the break as they flooded forward and substitute Will Vaulks and Giles combined to provide the chance for Moore who made no mistake with an emphatic header.

Cardiff's clean sheet was secured when the hosts saw James Husband hit the woodwork with a late effort.