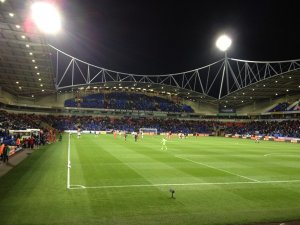 The hosts had started brightly against npower Championship leaders Cardiff but struggled to create opportunities, and their failure to deal with a first-half Peter Whittingham cross allowed Craig Noone to fire home the opener from 18 yards.

The 63rd-minute introduction of Ngog sparked a fightback from Freedman's men, the Frenchman having a goal disallowed before winning a penalty - converted by Martin Petrov - and flicking in a winner from close range.

However, Bolton's hero was then given his marching orders for a second yellow card in the 90th minute, capping an eventful evening for the frontman.

It was a cagey encounter for much of the first half with both teams battling for possession in the centre of the park, providing little challenge for Adam Bogdan and David Marshall in their respective goals.

Having not mustered a shot on target for the opening 40 minutes, it was the league leaders who opened the scoring. The hosts failed to clear their lines from a Whittingham cross, allowing Noone to fire the ball into the bottom-right corner of the goal from the edge of the area.

Noone's effort was all that separated the two sides at the end of a drab first half at the Reebok Stadium.

Bolton emerged for the second half with renewed intent and energy and it was not long before they started to threaten an equaliser.

Keith Andrews fired wide from the edge of the area before Chris Eagles stung the palms of Marshall from a similar distance.

Cardiff responded to Bolton's attempted fightback by placing their opponents under a spell of sustained pressure, but were unable to make it count and extend their lead.

Substitute Ngog had the ball in the back of the net on 64 minutes - just moments after replacing Kevin Davies - but the linesman ruled out the effort for offside, though he looked to have been played on by at least two Cardiff defenders.

Bolton's spell of pressure told on 68 minutes when Petrov grabbed an equaliser from the penalty spot. Ngog, who was a constant thorn in the side of the Cardiff defence after coming on, went down under a soft challenge from Kim Bo-kyung to allow Petrov to slot the ball past Marshall.

The Trotters doubled their lead just six minutes later. Cardiff's attempts to deal with a Mark Davies cross fell into the path of Eagles, who unleashed a long-range effort, which was flicked into the back of the net by Ngog on the edge of the six-yard box.

Ngog's evening came to an end shortly before the end when he picked up a second yellow card for a foul on Andrew Taylor.

Cardiff pushed to salvage something from the game and had a strong shout for a penalty in stoppage time, but were forced to return home empty-handed.