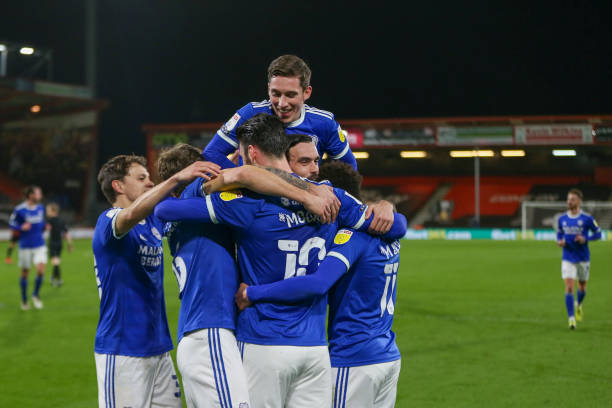 Bournemouth were much better in the second half but Shane Long's header 23 minutes from time was not enough to stop Jonathan Woodgate losing his first game as permanent head coach.

Two minutes later, home stopper Asmir Begovic had to come sharply off his line to slide out and stop former Bournemouth loanee Harry Wilson getting on the end of a quickly-taken free-kick.

Josh Murphy had Cardiff's first meaningful attempt on goal when he blazed over from 22 yards.

Bournemouth's Philip Billing and Cardiff counterpart Curtis Nelson were both shown yellow carded after a fracas on the halfway line.

Cardiff made their aerial advantage tell in the 28th minute when captain Morrison climbed highest at the near post to glance his header beyond Begovic from a Wilson corner and make it 1-0.

The Bluebirds were gifted the chance to double their lead eight minutes before half-time after Perry Ng was clumsily brought down by Diego Rico.

Sam Surridge should have reduced the arrears in the 41st minute but failed to beat Phillips with a near-post effort from point-blank range after Rico had crossed.

Woodgate, taking charge of his first game since being given the job until the end of the season, called Long and Arnaut Danjuma off the bench for the second half.

Eleven minutes after the restart, Phillips made another smart save to claw away Stanislas' low left-foot drive from eight yards.

Phillips was on hand again to acrobatically push Stanislas' 25-yard free-kick behind for a corner.

Bournemouth got their rewards for a much-improved second-half display when Long made it 2-1 with his second goal in as many games in the 67th minute.

Long headed home from underneath the crossbar after Danjuma's initial shot had been blocked by Morrison to send the ball spinning into the sky.

Stanislas then put another 25-yard free-kick onto the roof of the net as the home side went in search of an equaliser.

With eight minutes remaining, Danjuma fired tamely into the arms of Phillips after being teed up by Stanislas.