Ryan Fraser and Callum Wilson were on target as Bournemouth kicked off the season with a 2-0 win over newly-promoted Cardiff at the Vitality Stadium on Saturday writes Sky Sports.

Fraser opened the scoring midway through the first half with a close-range finish, although Bournemouth should have doubled their lead minutes later. 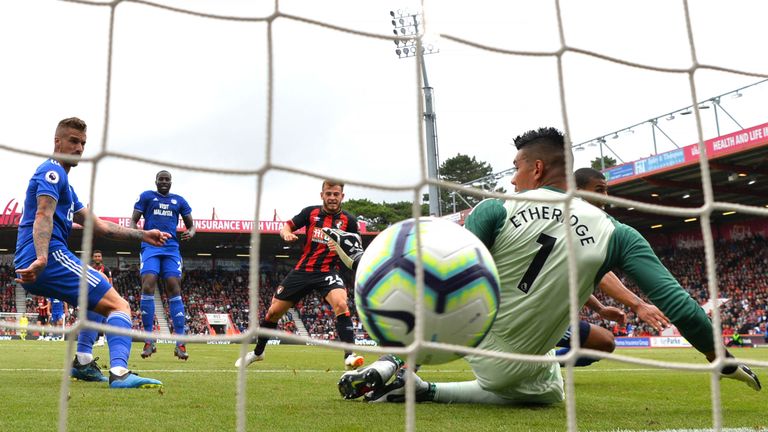 However, Cardiff goalkeeper Neil Etheridge did brilliantly to keep out Wilson's penalty, only for the striker to make up for that miss with an injury-time strike to seal the points.

As a result, Bournemouth won their opening match of a Premier Season for the first time ever, while after a five-year absence, Cardiff made a losing return to the top flight

After an evenly contested opening quarter on the south coast, the home side took the lead after a well-worked move.

Josh King's incisive through-ball sent Wilson clear in the box and the striker then pulled the ball back for the unmarked Fraser to coolly side-foot home from 10 yards out.

Eddie Howe's side should have been further ahead just past the half-hour mark when referee Kevin Friend decided Bruno Ecuele Manga had tripped Wilson in the box.

However, Etheridge - the first Filipino to play in the Premier League - guessed right and dived full length to his left to keep Wilson's well-struck penalty out.

The visitors were far more of a threat after the break, although the closest Neil Warnock's team came to levelling matters was midway in the second period when Sean Morrison somehow failed to score from virtually on the goal line.

And Bournemouth made the game safe in injury time after substitute Simon Francis got free to the right-hand byline, and his cut back was then rolled into the far corner of the goal by Wilson lurking near the penalty spot.