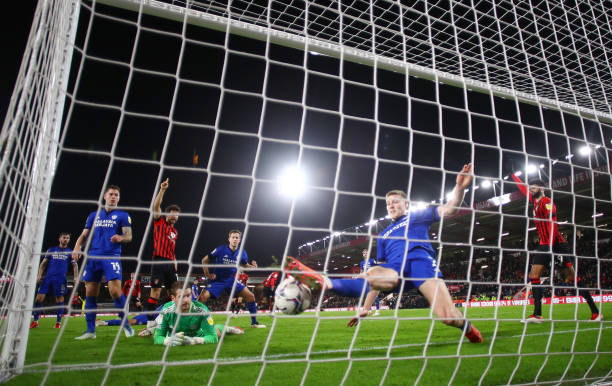 Cardiff had midfielder Leandro Bacuna sent off in first-half stoppage time as they were plunged deeper into relegation danger.

Bournemouth were looking for back-to-back wins to move four points clear at the summit after defeating QPR on Monday.

Jefferson Lerma had their first shot on goal with only three minutes on the clock when he fired over from long range.

In the 13th minute, in-form Bournemouth striker Solanke sent Lewis Cook through on goal, but the midfielder made a mess of his first touch, allowing Curtis Nelson to slide in and clear the danger.

Moments later, Solanke combined neatly with Christie before drilling a shot across the face of goal, which was well cleared by Bacuna.

Cardiff looked dangerous on the counter-attack and after 17 minutes Ryan Giles picked out the unmarked Mark Harris six yards out, but he could not bundle the ball past Travers.

Another good breakaway move from the Bluebirds in the 24th minute saw Will Vaulks fire into the gloves of Travers with a cross-shot.

Bournemouth took the lead in the 25th minute thanks to Christie's first goal in 20 games for the club.

Solanke did well down the right before picking out Christie just inside the area.

His shot looked to be heading wide before taking a deflection off Mark McGuinness, leaving the stranded Smithies powerless to come to his side's rescue.

Moore had a good chance to level when his attempt to guide Harris' teasing cross beyond Travers was pushed out by the Irishman.

Cardiff ended the half a man light after Bacuna was shown a straight red card for a reckless scissor tackle from behind on Philip Billing in the centre circle.

The challenge sparked an ugly melee.

Lerma had a good chance to make it 2-0 in the 64th minute when the Colombian headed over from a corner.

Solanke did find the net four minutes later with a coolly-taken finish.

The ex-Liverpool forward played a one-two with Billing before sliding his shot beyond Smithies and into the bottom left corner.

Soon after Solanke fired over from close range as Bournemouth continued to terrorise a tired Cardiff defence.

It was 3-0 seven minutes from time when Lerma's fiercely struck shot from a corner smashed against the underside of the bar before hitting Smithies and flying into the net.

Covid-hit Cardiff also saw top-scorer Moore hobble off with an ankle injury as they endured a miserable return to action after three weeks off.