Brentford failed to keep the pressure on second-placed Watford with a 1-1 draw against Cardiff in another blow to their automatic promotion hopes. 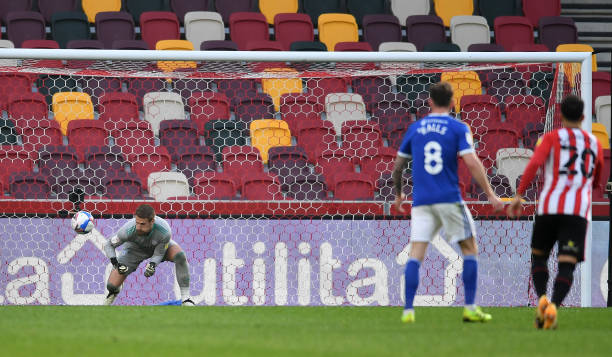 Kieffer Moore gave the Bluebirds the lead from the spot just before the hour but Tariqe Fosu levelled minutes later after an Alex Smithies howler.

Moore sent David Raya the wrong way from the spot after Ethan Pinnock handled Curtis Nelson's goal-bound header on the line after 57 minutes.

But the lead lasted just six minutes, Fosu's dipping 25-yard drive deceiving 'keeper Smithies, who let the ball squirm through his hands and in.

Marcus Forss wasted the Bees' best chance when he fired a first-half volley over from three yards when it looked easier to score.

In the end, the draw made it six draws in seven games for the Bees, leaving them looking over their shoulders at the chasing pack.

Marcus Forss should have put the Bees ahead on 10 minutes but his swept shot after a drilled cross from Mads Roerslev was saved low to his right by Smithies.

Cardiff responded instantly, Harry Wilson cutting in from the left to feed Will Vaulks, who scuffed his shot wide of the left hand upright.

Fosu blazed over from 30 yards midway through the half as Brentford struggled to find a way through Cardiff's resolute five-man defence.

The hosts were nearly caught napping just before the half hour when a long ball forward found Joe Ralls, whose first-time shot lacked the power to seriously test David Raya.

Brentford squandered a gilt-edged chance to take the lead on 34 minutes when Ivan Toney headed Fosu's cross back across goal at the far post but Forss blazed over with the goal gaping.

The visitors had Smithies to thank for keeping it level at the break when he raced off his line to deny Toney after a howler of a Marlon Pack backpass gifted the Bees' top scorer a chance.

Brentford started slowly after the break, creating few clear-cut chances, but Cardiff took advantage of the earlier misses when Moore converted from the spot.

Forss with a low drive and substitute Saman Ghoddos with a glanced header forced saves from Smithies within minutes of the goal, before the Bees levelled through Fosu.

Wilson saw a chance at the far post go agonisingly wide as the game opened up while a Ghoddos cross from the right on a counter failed to reap rewards.

The introduction of Sergi Canos breathed life into the Bees and he forced a smart save from Smithies on 78 minutes as they piled on the pressure.

Toney was inches away from giving his side the lead when he fired in a low drive that Smithies parried, but Forss was too slow to react to the loose ball.

Brentford threw everything at City in the dying minutes but created few chances as the Bluebirds made it three unbeaten.