Cardiff came from behind to maintain the pressure on Sky Bet Championship leaders Wolves with a 3-1 win at play-off hopefuls Brentford.

The result made it seven straight wins for the second-placed Bluebirds and opened up a seven-point gap over nearest rivals Aston Villa. 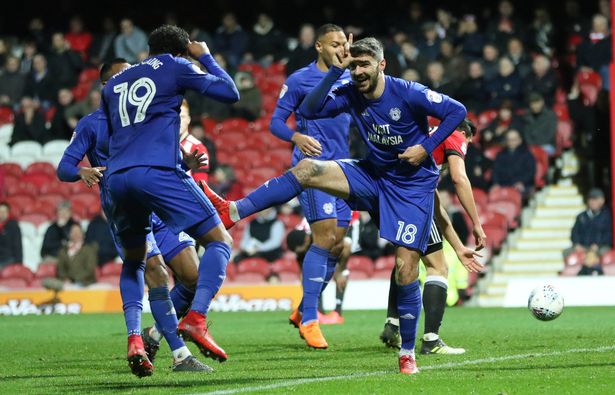 The Bees could have been ahead inside 15 seconds as they swarmed over the visitors, but visiting goalkeeper Neil Etheridge was equal to Maupay's snapshot and saved with his legs.

Brentford thought they deserved a penalty when Marko Grujic led with his arm in an aerial duel with John Egan, but the referee waves away the hosts' protests.

The Bees went ahead after five minutes when Sergi Canos played in Maupay and the Frenchman coolly dinked home over Etheridge from just inside the box.

The London side had goalkeeper Daniel Bentley to thank for keeping them ahead as he spread himself well to deny Paterson's point-blank effort on the 10-minute mark.

He came to his side's rescue again just before the Cardiff equaliser, this time palming Hoilett's volley from 12 yards around the post.

The equaliser arrived midway through the first half when Bamba swivelled on a half-clearance on the edge of the box to slam an unstoppable drive back across Bentley and inside the far post.

Brentford carved City open on the half-hour in an end-to-end first period, but Canos' side-footed effort lacked the conviction to seriously test Etheridge.

At the other end Bentley was off his line quickly to deny the onrushing Nathaniel Mendez-Laing as Cardiff looked to take an advantage into the break.

Nico Yennaris kept the Bees in it on 36 minutes, heading Sean Morrison's header from a set-piece off the line and taking a kick to his head for his troubles before Canos stung Etheridge's fingers with a dipping drive.

The visitors got their noses in front on the stroke of half-time when Junior Hoilett pounced on a Josh Clarke blunder and surged down the left to square for Paterson to fire into the roof of the net from close range.

Brentford had a strong shout for a penalty after the break when Maupay was taken out by Bamba inside the box, but their protests were waved away.

Cardiff sealed the win just before the hour mark when the home defence failed to deal with a lofted ball into the box and Zohore applied the finishing touch.

Ollie Watkins went close for the hosts before Bentley was in action again, tipping Zohore's near-post header over while Etheridge denied Egan an almost carbon-copy effort at the other end.

The Irishman should have given Cardiff a nervy last 10 minutes but fired his volley wide from close range as the game slipped away from Brentford.

In the end it was Cardiff's ruthless finishing that proved the difference between the sides on a night that left a severe dent in the Bees' promotion hopes.