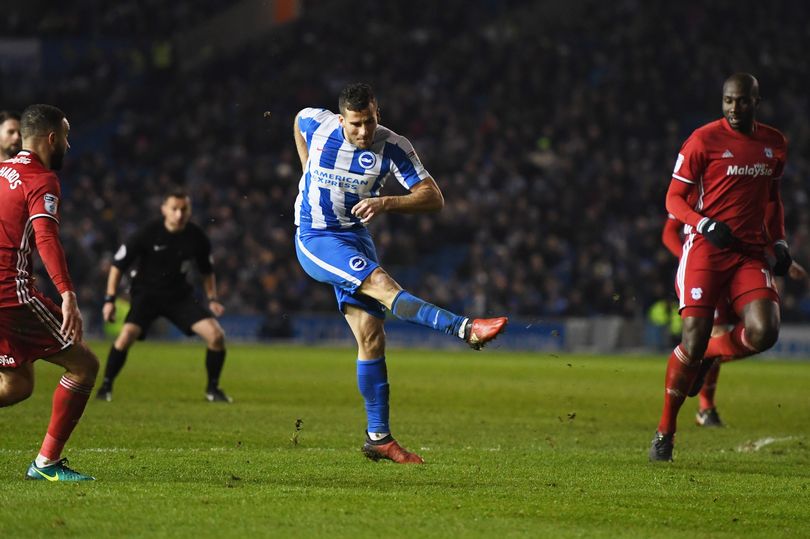 The striker ensured the Seagulls, in front of a 26,688 crowd at the Amex Stadium, recorded their fifth successive home league win and moved two points above second-placed Newcastle.

Cardiff, who had won their previous three league matches, were heading for a first clean sheet on the road since the opening day of the season before Hemed broke their resistance 17 minutes from time.

Brighton enjoyed early possession and City had a let off when, following a quick throw, Solly March's cross to the far post narrowly eluded Jamie Murphy.

Israel international Hemed, leading the Seagulls attack with Glenn Murray suspended, went close with a left-footed shot from the edge of the area.

Cardiff, who went into the game not having lost an away match at Brighton for 15 years, threatened when Joe Ralls fired into the side-netting after Junior Hoilett set up the chance.

City had an escape when central defender Lewis Dunk failed to make contact from inside the six-yard box following a corner from Anthony Knockaert.

Knockaert fired a free-kick wide of goalkeeper Allan McGregor's left-hand post on the half hour after Hoilett brought down Connor Goldson a yard outside the area.

Stockdale then parried a shot from 15 yards from Hoilett as the Bluebirds gained in confidence.

On-loan Hull shot-stopper McGregor, making his away debut for Cardiff, did well at the other end to parry a stinging left-footed drive from March just before the interval.

Brighton should have broken the deadlock five minutes after the break when Hemed wastefully shot wide after March delivered a perfect cross just outside the six-yard box.

March, playing just behind Hemed, set up the Israeli again with a neat pass and the striker's low shot was taken by McGregor.

Cardiff had a lucky escape when, from a Knockaert free-kick, central defender Shane Duffy headed wide from a good position from close range.

Albion boss Chris Hughton made his first change after 71 minutes when Beram Kayal gave way to Oliver Norwood and, from a corner from the substitute, Goldson had a low shot blocked by Greg Halford.

The Seagulls clinched victory in the 73rd minute through Hemed, who latched onto a pass from Norwood before turning on the edge of the area and beating McGregor with a powerful shot.

McGregor prevented the hosts from doubling their lead by keeping out a goal-bound shot from Murphy late on.