But there was considerable controversy surrounding the result with Cardiff twice denied after strong penalty appeals - with referee Mike Dean originally pointing to the spot after Cardiff's first appeal only to then reverse his decision.

Wood broke the deadlock in the first half after nodding past Neil Etheridge from a corner in the 31st minute.

Cardiff thought they were awarded a penalty shortly after the break when Dean pointed to the spot for a Ben Mee handball, but the referee changed his mind. 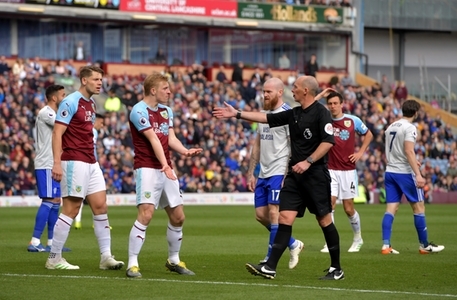 Mike Dean awards the penalty, and then reveresed his decision

And although Cardiff pushed for an equaliser, Burnley sealed the victory in injury-time when Wood headed in from point-blank range following a fine run by Dwight McNeil.

The result means Burnley have all-but secured their Premier League status for another season in 14th.

For Cardiff in 18th, their third Premier League loss in a row means they remain five points off safety with five games left to play ahead of their trip to Brighton on Tuesday.

After a fast start, with early warning shots from both sides, Burnley had their first clear opportunity to break the deadlock in the 26th minute when a low strike from an unmarked Ashley Westwood was hit straight at Etheridge.

Five minutes later and Burnley took the lead through Wood. McNeil's whipped corner - in the windy conditions - was met by the New Zealand international who directed his close-range header into the net.

With ten minutes left of the half, Burnley could have gone two up through Westwood once again, but his low shot was expertly parried away by Etheridge.

In the 47th minute Dean awarded Cardiff a penalty when Mee appeared to head the ball onto his own arm. But after consulting with linesman Darren Cann, Dean changed his mind to the disdain of Neil Warnock on the touchline.

The decision fired the Cardiff players up and their biggest chance in the second half fell to an unmarked Junior Hoilett in the box in the 63rd minute, but he blasted his first-time shot over the bar.

Burnley fought back and Etheridge had to make a string of fine saves. First, he denied Wood from close range in the 74th minute, before he tipped Mee's header from a corner over the bar.

And in injury-time Burnley doubled their advantage through Wood, who headed in from close range to capitalise on McNeil's brilliant run and cross down the left flank.