Joe Allen saw his 91st-minute header crash against the crossbar to leave Stoke still searching for their first away win since December 2 as they recorded a goalless Championship draw at Cardiff. 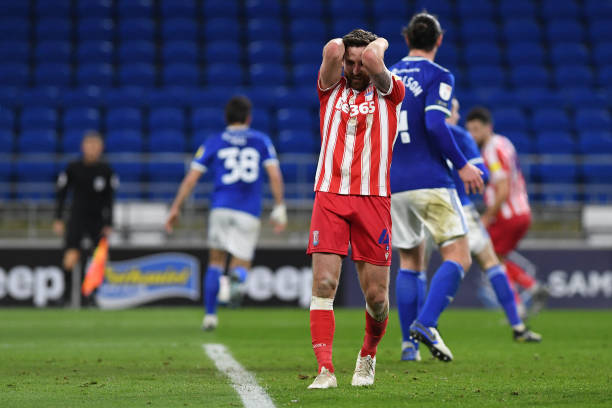 This was Stoke's 11th game in a row away from home without victory and, had top scorer Nick Powell not fluffed his lines in the first half, and Allen's header hit the mark from eight yards, then it could have been a different story.

After a long trek to the north east last weekend where they were beaten 3-0 at Middlesbrough, Stoke made it 600 miles in four days as they headed to south Wales in search of their first away win since edging lowly Wycombe 1-0 last year.

Cardiff had also been beaten four days earlier - 2-1 at home to Watford - and were looking to stay in touch with the teams just above them in the play-off places.

The game got off to a flying start and there were early chances at both ends.

Stoke won back-to-back corners, the second of which came after a Rhys Norrington-Davies shot had been deflected inches wide of the left post.

Cardiff hit back with a fierce shot from Leandro Bacuna that forced Adam Davies into a reaction save after a quick break, but the better chances fell to the visitors.

Steven Fletcher forced a save out of goalkeeper Dillon Phillips as he flicked at a cross and, from the rebound, Jordan Thompson's effort was cleared off the line by Perry Ng.

After such a close shave, the home defenders should have been on high alert, but a brilliant pass from John Obi Mikel to Fletcher on the edge of the home 'D' tore them apart in the 20th minute.

Fletcher controlled the ball superbly with his back to goal and then laid it off to his left for the onrushing Powell.

With only the goalkeeper to beat, Powell should have taken his tally for the season to 12, but instead he fired wide of the target in what was the biggest chance of the half, while Cardiff had their best opportunity to break the deadlock on the stroke of half-time.

Kieffer Moore was brought down 25 yards out and Will Vaulks swung the resulting free-kick to the far post. Sean Morrison came sliding in but missed the ball by a few inches with the goal at his mercy.

Bacuna had a shot blocked three minutes after the break that dipped just over the crossbar and then Moore missed the target from close range following a long throw in by Vaulks.

Moore had the chance to add to his 16 goals this season in the 80th minute when Jonny Williams and Bacuna set him free.

A heavy touch from the Wales midfielder then let him down and allowed Davies to gather and then Moore sent a left-footed volley wide of the mark.

Right at the death Allen hit the crossbar with a header that would have won the game but the spoils were shared.

Mick McCarthy: "I was angry at half-time because we weren't intense enough in our pressing. It's the first time I have raised my voice. It had all gone very well up until last weekend. We didn't want to lose again after last that and it was a hard-earned point in the end.

"I told them 'if you can't win it, then don't lose it' and the draw means we've started another unbeaten run."

Michael O'Neill: "It was certainly a better result than Saturday, when we were disappointed at losing 3-0 at Middlesbrough. The most important thing was to get a good reaction and to have a good attitude to this game.

"We had the better chances and we clearly deserved to win the game. We were the better team in the first half, although the second half was a lot more even."

This piece could go one of two ways. I could write a normal length reaction post to tonight’s miserable 0-0 draw between Cardiff City and Stoke City at Cardiff City Stadium which would be yet another long lament about the fact that we are so bad at passing the ball and for much of the time, we don’t bother trying to do so as we opt instead for the vague “lump” in the direction of our knackered centre forward.

Alternatively, I could decide to only refer to our chronic limitations when we have the ball merely in passing – hardly the most apt of phrases under the circumstances I know! Going with this option would make this report quite a bit shorter than usual because there’s so little worth saying about the match otherwise.

I’m going to go with the second alternative with the proviso that I may slip into criticism of our passing inadvertently because I’m so sick and tired of seeing us turn what could and should be something simple into something that we make look impossible a lot of the time, but I promise I won’t go on too much about it.

Anyway, to the game. I’ll start by saying that, although it would have been very harsh on a Stoke team that could legitimately claim that they had the better chances to break the deadlock, this was the sort of scruffy home game we used to win 1-0.

For an example of what I mean, you only have to look at last season’s match against the same opponents when we scored early on through Leandro Bacuna in what was Neil Harris’ first home match in charge and then ground our way through the remaining eighty minutes against opponents who were lacking in confidence and too close to the bottom of the league for comfort.

We don’t win home games in such a manner these days though – we don’t get the three points at home often enough, but when we do, they tend to be gained by conclusive margins.

A week ago, we played well in seeing off a poor Derby team by 4-0. That was a fairly typical 20/21 home win for us, but top six finishers should also be able to eke out the dour 1-0 wins on their own patch as well – for a side that had mastered the art of “winning ugly” during our previous two seasons in this division, we have certainly lost the knack this time around when it comes to home games at least.

City were forced into defensive changes because Curtis Nelson had not recovered from the calf injury which forced him off on Saturday against Watford, so Ciaron Brown dropped into the back three in his place and Perry Ng stayed on the left, with Tom Sang returning on the right. Mick McCarthy also rested Harry Wilson and Josh Murphy and went instead with Sheyi Ojo and Leandro Bacuna, while Marlon Pack replaced Joe Ralls in central midfield.

Those defensive changes may have accounted for the fact that we looked shaky at the back early on as Stoke, first, worked a short corner routine which included an air shot that I’m pretty sure was not deliberate (it was a truly superb move if it was!) and ended with a shot that deflected narrowly wide. The visitors came closer soon after when City were opened up too easily on their right and Dillon Phillips had to save Steven Fletcher’s close range shot, then it needed a goal line clearance by Ng to keep Jordan Thompson’s follow up effort from going in.

Shortly after that, a blunder by Aden Flint led to a bad miss by Nick Powell who side footed wide with only Phillips to beat, but that was the last we saw of Stoke as an attacking force until Joe Allen headed against the crossbar in added time at the end of the match.

For much of the time, City were unable to create anything that could be called a genuine scoring opportunity – Bacuna had a couple of shots saved pretty easily by Welsh international Adam Davies and Sean Morrison was inches away from connecting with a Will Vaulks free kick in the first half, but it was after the break that City will feel that they could have got the goal which would have won the game.

Unfortunately, Keiffer Moore was the villain of the piece this time missing three chances of varying degrees of difficulty. The first one looked bad as Moore fired well over the top from close in as Stoke struggled to deal with a Vaulks long throw, but the ball had to be hit early as it dropped and I thought it was quite a difficult chance. By contrast, his second one when his poor touch after being put through by a combination of substitute Jonny Williams and Bacuna enabled Davies to make a simple save was quite an easy chance by his standards, while the third one when he was through again and opted to try a side footer from fifteen yards that passed narrowly wide of the post looked a tired effort to me.

In fact, I thought, for the first time this season, it looked like a tired performance almost from the start by Moore who is, in some ways, paying a price for making himself indispensable to City. Tonight, Moore played the full ninety minutes again as Mick McCarthy, for reasons I couldn’t understand waited more than seventy minutes to make a change in a game where his team were playing very poorly – Williams for the disappointing and inconsistent Ojo was the substitution and it was odd that there was only one other, delayed until the eighty third minute when Wilson came on for Bacuna.

Our manager explained the decision to keep Moore on by referring to his value when defending free kicks and corners, but what about giving him some support up front by bringing on one of max Watters, Mark Harris or Rubin Colwill? Also, this doesn’t explain the lack of changes to a misfiring midfield and why it took so long to make the meagre number of substitutions we did see.

There was one other moment when City could have won it as Davies was too casual in going for a Vaulks long throw, fumbled and the ball rolled agonisingly close to the goal only to pass inches wide of the far post with Williams just unable to apply a scoring touch.

Trying to take something positive from the game, I thought Sang’s passing in the right wing back role was an oasis in what was, the occasional contribution by Pack apart, a desert of mediocracy when it comes to that part of the game. The question is would Sang be able to maintain such standards if he was given a concerted run in the largely pass free zone that is our first eleven?

So, City drop another place following Middlesbrough’s win over Preston and, with a fourth poor performance in their last five games are looking a long way short of a top six team going into the game at Swansea on Saturday – the jacks were beaten 3-0 at Bournemouth tonight, but, even so, you’ve got to think that the record of there never having been a league double completed in fixtures between the two clubs is likely to end on Saturday on this evidence and the evidence of our recent matches.

A few hours earlier, the Development team had also drawn a blank, going down to a single goal defeat at QPR – it’s not just the Play Off hopes of the first team that have diminished recently, both the Under 23s and Under 18s have lost two out of their last three games now.