Andy Mangan marked his return to Shrewsbury with a winning goal for the League One club as they beat Championship side Cardiff 1-0.

The 29-year-old rejoined the Shrews for a second spell from Tranmere on Thursday and made an immediate impact with a second-half header to put Micky Mellon's side in the FA Cup fourth round draw. 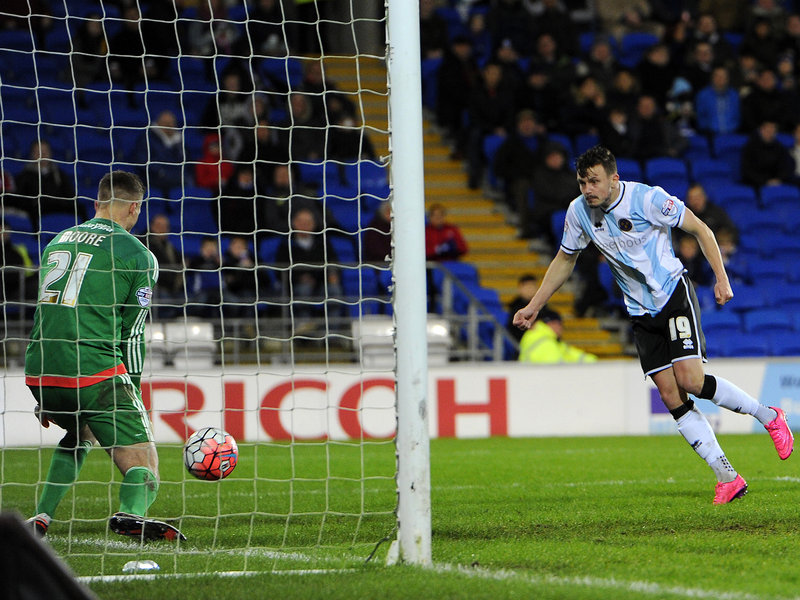 Just 4,782 - the second lowest ever crowd at the Cardiff City Stadium - watched the Shrews bounce back from their 7-1 defeat against Chesterfield last weekend to dump the Russell Slade's side out of the competition.

They had almost stung Cardiff inside the opening minute when Mangan got on the end of Ian Black's through ball but his shot was blocked by Bruno Manga.

A mistake from Nathaniel Knight-Percival handed Cardiff their first opportunity but former Bluebird defender Anthony Gerrard did well to get in the way of Alex Revell's shot.

The closest Cardiff came to opening the scoring in the first half was when on-loan Newcastle forward Sammy Ameobi cut in from the left and drilled a low shot against the base of the post.

Shortly after Ameobi showed good feet on the edge of the visitor's box but after finding Revell he could only shoot straight into the arms of goalkeeper Mark Halstead.

Cardiff started well at the beginning of the second period but once again when Revell found himself in space he was quickly closed down by Shrewsbury defender Zak Whitbread.

Slade's side were dominant in possession but struggling to produce anything meaningful in the final third and they were made to pay for it in the 62nd minute.

Shrewsbury broke from their own half allowing Scott Vernon to whip in a perfect ball from the left and Mangan rose between two Cardiff defenders to head the visitors in front.

Federico Macheda had Cardiff's best chance of the half when he latched on to Fabio's long ball over the top but he could not find a way past Halstead.

Jordan Clark almost wrapped up the game for Shrewsbury with 12 minutes to go when got in front of a defender to meet Mangan's cross from the left but his effort went narrowly wide.

Manga head a great chance to equalise in injury time when he met Peter Whittingham's corner unmarked but he sent his header wide of the post.