Gylfi Sigurdsson relieved the pressure on Marco Silva with a goal in each half in Everton's 3-0 win at Cardiff, writes Sky Sports.

Coming into the game on a run of one win in six, Everton looked nervous but still had the better of the first half and snatched the lead four minutes before the break when Sigurdsson swept home Seamus Coleman's cut-back from the right following a throw-in to become the Premier League's highest-scoring Icelander.

Sigurdsson smashed in another midway through the second half once Bernard's shot had been parried into his path. The goal seemed to relax Everton, and they controlled the rest of the game in some style. 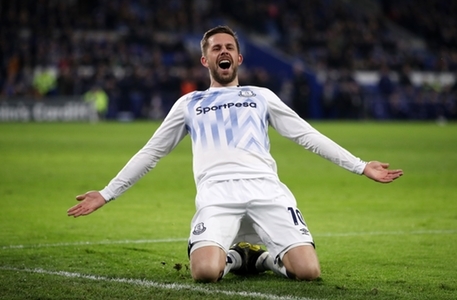 Cardiff did carve out several half-chances but failed to register a single shot on target across the 90 minutes, while Calvert-Lewin netted an injury-time third for Everton on the break to seal a comprehensive and welcome win for Marco Silva ahead of a Merseyside derby showdown with Liverpool live on Sky Sports Premier League on Sunday from 4pm.

The game burst into life in the early stages with Cardiff close to a first-minute opener when Phil Jagielka's slip allowed Kenneth Zohore to cross for Nathaniel Mendez-Laing at the far post, but Lucas Digne's smart block put the ball behind before he could reach it.

Zohore went for goal himself with Cardiff's next chance from Gunnarsson's lob into the box, chesting the ball down but firing into the side netting under pressure from Michael Keane.

Everton had gone close through a dipping Theo Walcott volley from the angle but took a half-time lead four minutes before the break. When Cardiff switched off from a throw-in, Morgan Schneiderlin slid Coleman away down the right and he cut the ball back to Sigurdsson, who slotted the ball into the far corner.

After half-time Cardiff again came close when Bruno Ecuele Manga spotted Zohore playing on the shoulder of Keane and sent him racing onto his long ball forward. He cut inside from the left but with Bobby Reid and Mendez-Laing in support, Jagielka positioned himself between both and cleared before either could turn in an equaliser.

Instead Everton doubled their advantage within minutes. Richarlison cut a frustrated figure as he trudged off for Bernard, but the substitute vindicated Silva's decision to introduce him almost immediately by using some quick feet to beat Manga before seeing his shot parried by Neil Etheridge into Sigurdsson's path, from which the midfielder's powerful drive left the goalkeeper no chance as it flew into the roof of the net.

A sloppy Cardiff performance was booed off at full-time but not before Everton had put the cherry on a considerable cake when Idrissa Gueye took advantage of some lax defending to slide through Calvert-Lewin, and despite Etheridge's save his powerful drive flew into the bottom corner.