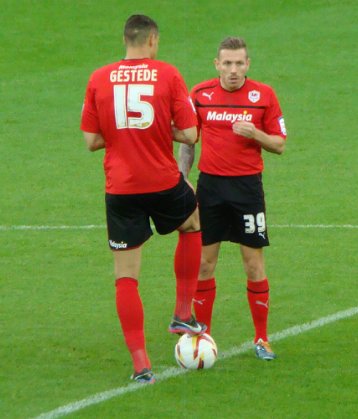 Rudy Gestede scored the only goal of the game as league leaders Cardiff made it three in a row against Millwall to move five points clear of second placed Hull.

And it was the former Metz forward who was quickest to repay the faith of his manager after just eight minutes when Craig Noone beat Shane Lowry with a mazy run before crossing for the Frenchman who tapped home from six yards.

The visitors' problems worsened 10 minutes later when winger Scott Malone had to be replaced by Liam Feeney with the Bluebirds already in a rampant mood.

Former Aston Villa defender Lowry made amends for his early lapse blocking a Bellamy effort inside the box while goalkeeper David Forde was forced to deal with a flurry of tricky deliveries in quick succession.

But they were showing no lack of firepower themselves following 11-goal Chris Wood's return to parent club West Brom. Lowry delivered for Darius Henderson on 24 minutes whose header drew a fine stop from David Marshall.

Lions skipper Danny Shittu, who requested not to be selected by Nigeria for the Africa Cup of Nations earlier this week, had to be alert at the opposite end just after the half-hour mark to get in the way of Craig Conway's goal-bound effort.

The hosts were forced into a change of their own just before the half-time whistle when Aron Gunnarsson had to make way for Jordon Mutch. The switch interrupted the flow of the game and they had Marshall to thank again seconds later when he blocked a stinging drive from Shittu with his feet to ensure they led at the break.

Substitute Mutch went close to a second 10 minutes after the restart but Forde produced a flying save to keep out his long range drive.

Dangerous in attack, the hosts looked susceptible at the back and Dany N'Guessan, recalled to the starting XI following the departure of Wood, fired a warning shot into the side netting on the hour mark after a swift counter attack.

Kenny Jackett's side were firmly on top in the second-half and the impressive Marshall was again called into action minutes later this time tipping Henry's free-kick round the post.

His opposite number was keen to prove his worth as the game began to open up in the final 20 minutes and Forde kept them in it with a brilliant parry to deny Noone.

Mackay introduced Helguson in place of Gestede 13 minutes from time as the Bluebirds used all their experience to hold on for a vital three points.