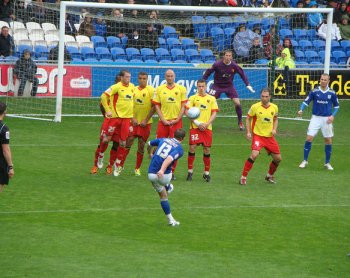 Sixth-placed Cardiff looked like they would go 10 points clear of the Hornets with four games remaining after Kenny Miller's first-half injury-time header had given them the lead.

Watford had spurned a host of chances to level proceedings in an end-to-end second half but Nosworthy poked home to ensure the spoils were shared.

It meant Bluebirds manager Malky Mackay was denied a win against his former club but the Welsh side remain in the play-off positions after Hull beat Middlesbrough.

Watford, meanwhile, have suffered just one defeat in their last nine matches and remain in 13th, seven points adrift of the top six.

Cardiff had not won at home since beating Peterborough on February 14 but Ben Turner almost got the hosts off to a dream start when his header at the far post from Peter Whittingham's right-wing corner went inches wide.

Craig Conway, making his first start in two months, was lively in the opening stages and he struck narrowly wide of the right-hand post from the edge of the area.

The Hornets started to see more of the ball as the half progressed but Jonathan Hogg was cautioned after a rash challenge on Conway ended the Cardiff midfielder's afternoon.

It was particularly harsh luck for the 26-year-old Scot, who had just made his way back to full fitness, and he was replaced by Liam Lawrence after 37 minutes.

The game had been petering out and it seemed certain that the score would be goalless at the interval but Watford were made to pay for a defensive lapse.

Don Cowie's superb cross from the right found Miller unmarked in the area and he headed into the top corner on the stroke of half-time for his first goal since January 21.

And only the post denied another Miller header from doubling his and Cardiff's tally at the beginning of the second half.

Watford nearly got themselves back into the game, however, and only a brilliant save from Cardiff goalkeeper David Marshall denied Martin Taylor's powerful header from Sean Murray's corner.

From the resulting set-piece, another header, this time from Troy Deeney, was cleared off the line by Miller, while Watford's appeals for a penalty after Taylor went down under pressure from Mark Hudson were turned down.

Cardiff were living on the edge and Deeney spurned another glorious chance when he struck over from point blank range after getting in front of Hudson to latch on to substitute Joe Garner's cross.

Just as Watford thought they were on the cusp of levelling proceedings, Aron Gunnarsson nearly doubled Cardiff's lead but his header was superbly saved by Tomasz Kuszczak.

Hudson should have done better after he sent a diving header from four yards wide and he was made to pay for his profligacy as Nosworthy levelled proceedings in the 82nd minute.

Murray's free-kick from the right was floated towards the back post and the on-loan Sunderland defender was on hand to stab past Marshall.