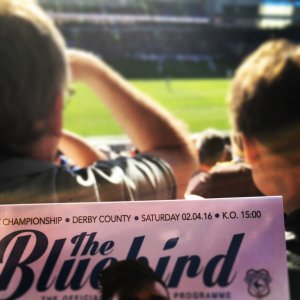 Cardiff moved a point closer to the Championship play-offs with a 2-1 victory over Derby. Bruno Ecuele Manga and Stuart O'Keefe scored in either half, both from Peter Whittingham headers, to extend Cardiff's impressive home record.

Chris Martin equalised early in the second half but that could not save Derby from further disappointment on the road. County have now won just once in their last nine away games and slipped to sixth place just two points above Cardiff in the last play-off spot.

And it was a pleasing day for the Welsh club in front of their biggest crowd at Cardiff City Stadium of 28,680. With both sides pressing for a place in the play-offs, it was little surprise this game took time to get going with neither willing to overcommit.

A long-range effort from Cardiff midfielder Joe Ralls was all that either side had to show for a cagey opening half-hour. Martin's heavy challenge on Peter Whittingham finally sparked the contest into life. The Derby striker escaped punishment for the tackle, which provoked an angry reaction from Cardiff's players. But Whittingham got back to his feet to win a corner and then provide the delivery for the opening goal eight minutes before half-time.

Derby made sure to contain towering defender Sean Morrison at the set-piece but they failed to spot his centre-back partner Ecuele Manga arriving late to head powerfully past Scott Carson. Derby's frustration boiled over with another heavy tackle by Jason Shackell that sparked another brief melee. Shackell, who had shaken off a groin injury to start, was booked while Anthony Pilkington curiously also had his name taken.

Derby regrouped at half-time and needed less than five minutes of the second half to equalise. Marcus Olsson had proved a threat down the left flank and his cross found Martin in space six yards out

Martin miscued his first effort but was quick enough to head his second past the stranded David Marshall. That sparked an immediate reaction from Cardiff, who had lost just one of their previous 15 league games at the Cardiff City Stadium.

Craig Noone had the chance to regain the lead within a minute when one-on-one with Carson but Derby's goalkeeper was quick off his heels to block the shot. Whittingham followed but Lex Immers could not get into the box quick enough to turn in the second cross.

Carson then denied Scott Malone at his near post moments later and Craig Noone saw his effort deflected wide. It was from the resulting corner that Cardiff took the lead for the second time on 68 minutes.

Whittingham was again the provider but when his cross struck Morrison, it fell invitingly into the path of O'Keefe who turned and shot past Carson from close range.