Kieffer Moore gave the Cardiff fans a taste of what they might have had as he scored twice to earn a point for Wigan in a 2-2 draw at the Cardiff City Stadium.

The Bluebirds were interested in signing the Wales international last month but baulked at Wigan's £4million price tag. That decision almost came back to haunt them as he twice put his side into the lead. 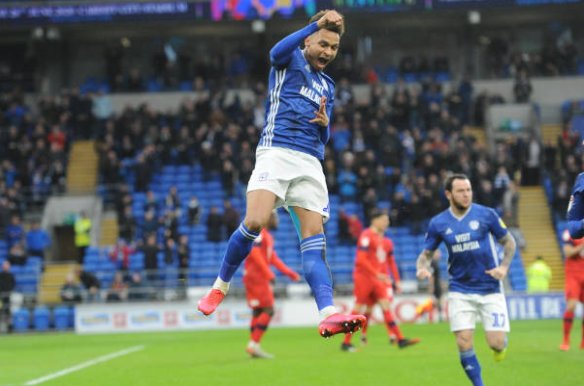 It was action-packed from the start as Cardiff looked to extend their unbeaten league run to seven matches to push themselves into the play-off mix and Wigan tried to build on their 2-2 draw with Middlesbrough earlier in the week.

Lee Evans picked up the first yellow card of the game in the opening minute for a late challenge on Will Vaulks and the opening goal came in the fifth minute.

Evans and Gavin Massey built an attack that earned a corner and a short ball to Egypt international Sam Morsy caught the home defence napping.

His low cross into the box was then deftly back-heeled past Alex Smithies into the Cardiff goal by Moore as he was surrounded by three defenders to give the visitors the lead.

It did not take long for the Bluebirds, who came into the game on the back of a 3-0 win at Huddersfield earlier in the week, to get back on level terms.

A long throw by Vaulks was headed back across goal by Sean Morrison and Josh Murphy was on hand to half-volley past David Marshall to make it 1-1 after only eight minutes.

The confidence surged through the home side after Murphy's strike and Marshall was forced to make important saves from two free-kicks just outside the area from Tomlin and Vaulks.

Albert Adomah thought he had a case for a penalty just before the interval when the on-loan winger claimed he was held back by a Wigan defender after an end-to-end counter-attack.

Referee John Brooks was not impressed, but moments later awarded a spot-kick to Wigan when Curtis Nelson was adjudged to have blocked a shot by Morsy with his forearm.

Moore stepped up and netted his second goal as he sent Smithies the wrong way in the fourth of five added minutes at the end of the first half.

Cardiff equalised for the second time after 55 minutes when another long throw from Vaulks caused panic in the Wigan defence. The ball was only half-cleared and Marlon Pack picked up the pieces and scored via the chest of Wigan midfielder Kai Naismith.

Morrison had the ball in the net from a corner in the final minute of added time but the referee ruled there had been a foul on Marshall in the Wigan goal as he punched clear.