Sky Bet Championship leaders Cardiff were left frustrated in the Welsh capital after being held to a 0-0 draw by Derby County.

Neil Warnock's side stayed top of the league with a point, but neither team deserved to come out on top in a game of few clear-cut opportunities.

Junior Hoilett had Cardiff's best chance in the first period and the second half was livelier than before the break, with Tom Lawrence standing out in the Derby ranks. 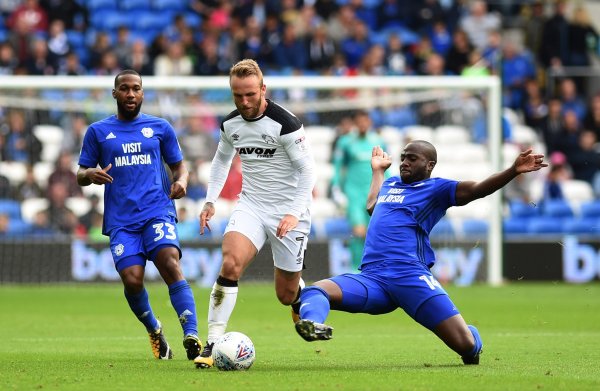 Tom Huddlestone put a shot wide for the visitors and although Cardiff pushed for a goal, only a superb point-blank stop from Neil Etheridge denied David Nugent a late Derby winner.

Derby included Wales internationals Joe Ledley and Lawrence on familiar territory, but a slow start saw both teams struggle to get going.

In the 17th minute, Cardiff had the first chance as Hoilett let fly from the edge of the box only for former England goalkeeper Scott Carson to acrobatically tip the ball over the bar.

The Canada international's effort came out of the blue and although Derby were neat in possession - Ledley and Huddlestone anchoring midfield - the visitors lacked an attacking edge. Johnny Russell's cross was calmly cleared by Bruno Manga in Derby's best chance. 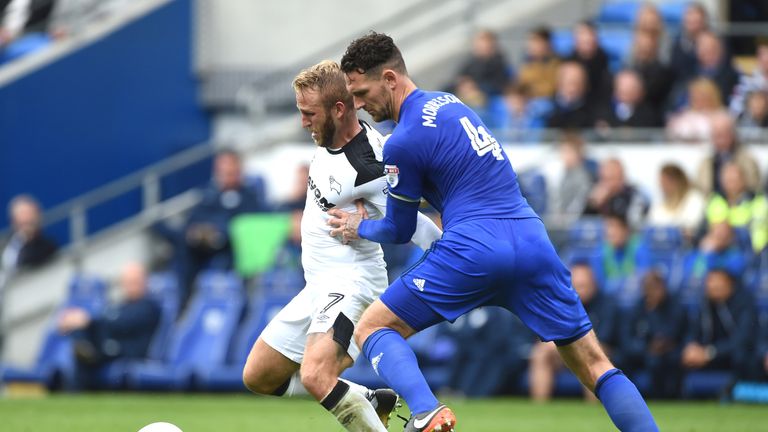 On the verge of the break, Loic Damour fired wide after robbing Craig Forsyth, but a quiet first period came to an end with the game goalless.

Derby introduced striker Chris Martin for the ineffective Sam Winnall at the break. Sean Morrison and Hoilett headed Joe Ralls corners wide on the game's resumption and Nathaniel Mendez-Laing went close as Cardiff began to build up a head of steam.

Derby finally had their first chance when Lawrence drifted clear and pulled the back for Huddlestone whose effort deflected just wide of Etheridge's post.

Forsyth's overhit cross came back off the Cardiff crossbar and seconds later, only a fine Richard Keogh block stopped Mendez-Laing from testing Carson at the other end.

Damour was then booked for a nasty tackle on Keogh and was immediately replaced by Lee Tomlin as Warnock rolled the dice in search of a home goal.

Ralls was next to try and test Carson, but could not find the target. Referee James Linington was an unpopular figure with the home crowd, giving a series of decisions against Cardiff.

But the truth was Warnock's men did not create enough chances to come out on top, despite pushing hard late on. In fact, Bradley Johnson put two shots wide for Derby in the final 10 minutes and Etheridge did brilliantly to save from substitute Nugent as the visitors ended the game on top.