Cardiff had the better of the game and should have broken the deadlock when Kenneth Zohore headed wide early in the second half.

Newcastle looked laboured and, after Kenedy avoided a red card for kicking out at Victor Camarasa, substitute Isaac Hayden was sent off in the 66th minute for sliding in from behind on Josh Murphy. 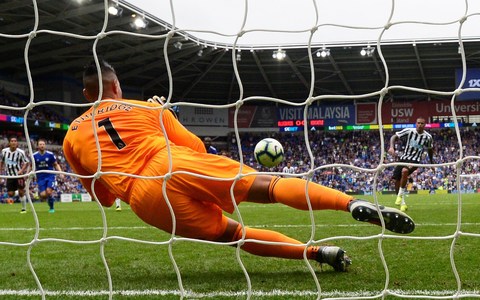 But Cardiff could not capitalise and were fortunate in the end to leave with a point from a goalless draw after Neil Etheridge saved Kenedy's penalty with almost the final kick of the match.

The miss capped a dismal display from Kenedy, while Etheridge has now saved a spot-kick in both of Cardiff's opening two matches of the season.

Last weekend it was in a 2-0 defeat to Bournemouth but on this occasion Etheridge's save earned Cardiff a point they will likely feel they deserved on the balance of play.

Etheridge was called into action to keep out early efforts from Kenedy and Ayoze Perez, but, at the other end, Sol Bamba saw a header from a corner blocked on the line.

The visitors appeared fortunate not to be reduced to 10 men in the 34th minute when Kenedy kicked out at Camarasa and escaped punishment.

Zohore then went close with a header before Etheridge saved again from Perez.

Cardiff continued to look the more positive side after half-time and Zohore should have scored when he headed wide from Joe Ralls' cross in the 54th minute.

Newcastle were finding it difficult to get out of their own half and their efforts were hampered further when Hayden was shown a straight red for a tackle from behind on the impressive Murphy.

Harry Arter, who escaped a red for a sliding challenge from behind on Joselu, shot wide as Cardiff pressed for a winner, but in the end it was Newcastle who went closest to breaking the deadlock.

Cardiff captain Sean Morrison blocked Yoshinori Muto's cross with his arm and Kenedy stepped up to take the penalty, only to see Etheridge guess right and save.