In a first half devoid of attacking intensity from both sides, Lewis Grabban had the best chance when he dragged a shot wide, before Josh Murphy had a penalty shout waved away. 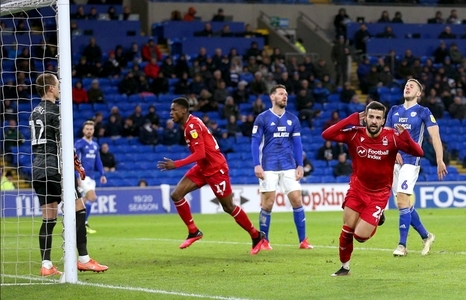 Shortly after the restart, Silva connected with Grabban's cutback to give Sabri Lamouchi's side what proved to be the decider (49), handing them their first victory in 11 meetings between the two sides.

As a result, they move above Fulham into third and boast a six-point gap between themselves and seventh-placed Bristol City, while Cardiff sit 10th, six points outside the top six.

The fact the two sides registered 18 shots between them in the first 45 minutes suggested a typically thrilling, high-octane Championship affair at the Cardiff City Stadium, yet that could not have been much further from the truth.

Forest's Sammy Ameobi forced two saves from goalkeeper Alex Smithies, but there was a distinct lack of quality in the final third from both. Grabban had already gone five games without a goal - a run stretching back to January 22 - and he summed up his luck when he dragged wide from a Joe Lolley cross.

Moments before the first half came to a close, Cardiff felt they should have been awarded a penalty as Josh Murphy was brought to ground by Matty Cash. Referee Stephen Martin disagreed, however, with boos ringing around the stadium as the teams left the field.

Prior to the game, both sides had scored 30 second-half goals across the season so far, and there was not long to wait for the opener after the restart. A sublime Ben Watson pass found Grabban on the right-hand side of the area and he stood up a cross that Silva diverted into the back of the net.

Substitute Alfa Semedo went close to forcing a decisive second when he hit a first-time shot from inside the area later on, but Joe Bennett and Smithies inadvertently - and painfully - combined to keep his fierce effort from finding its intended target.