Aleksandar Mitrovic extended his record as the Sky Bet Championship's top goalscorer to secure Fulham a 1-0 victory at Cardiff. 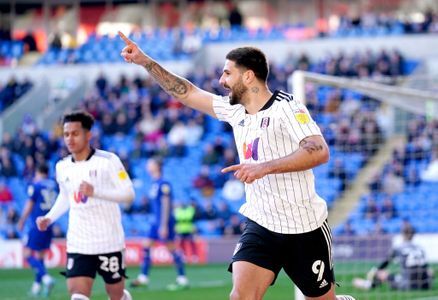 Having beaten Ivan Toney's second-tier record since the competition was rebranded, the striker claimed his 34th goal of the campaign.

The goal was enough to see off a spirited Cardiff side and keep Fulham well clear at the top of the table with an eighth win in 10 league games.

Marco Silva's side were not at their best in a sluggish first half but did not need to be against limited opposition who have now won just one of their last five matches.

Harry Wilson returned to face his former club and it was the Wales midfielder who produced the game's first effort on goal in the 13th minute.

His snapshot was saved by goalkeeper Alex Smithies, who almost immediately turned from goal saver to goal creator.

His quickly-taken goal-kick was flicked on by Rubin Colwill but James Collins could not find a way past the onrushing Marek Rodak.

Cardiff pressed down each flank through Cody Drameh and Alfie Doughty, but there was a lack of quality with the final ball and they rarely threatened Rodak.

In contrast, Fulham had a striker who only needed one opportunity.

Mitrovic gave Aden Flint the slip for the first time and was unmarked at the far post to head Wilson's left-footed cross back across goal and past Smithies in the 41st minute.

It was the striker's sixth goal in his last five games and put Fulham firmly in charge just before half-time.

Having failed to find their usual rhythm in the first half, the goal and half-time talk from Silva galvanised the league leaders.

They had a claim for a penalty waved away by referee Leigh Doughty seven minutes into the second half when Flint appeared to handle the ball after Wales pair Wilson and Nico Williams combined down the right.

Just two minutes later, and Bobby Decordova-Reid came close to silencing the Cardiff support, who booed his every touch following an unhappy 18 months in the Welsh capital.

He headed Harrison Reed's free-kick on target, only for Smithies to tip his effort over the crossbar before setting up Mitrovic moments later, but the Serb will have been disappointed not to hit the target.

Cardiff, to their credit, did not buckle under the growing pressure but were limited to half-chances.

Captain Joe Ralls was their driving force and his burst not only led to a yellow card for Reed but saw Tommy Doyle fire narrowly wide from the resulting free-kick.

The hosts rallied for an equaliser in the closing stages but Joel Bagan headed wide before Flint fired over in stoppage time.