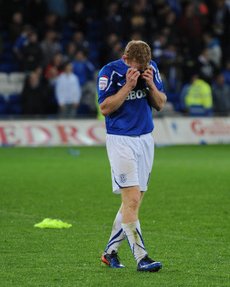 Shane Long's 24th and 25th goals of the season proved his most priceless as Reading convincingly saw off Cardiff with a 3-0 win that sets up a Wembley date with Swansea in the npower Championship play-off final.

The sought-after striker's brace denied the chance of a south Wales showdown on May 30 and instead means Swans boss Brendan Rodgers will come up against the club he represented as a player, youth-team coach and then manager for a short-lived six-month spell in 2009, when he was replaced by the ever impressive Brian McDermott.

After a tight goalless semi-final first leg last Friday, a touch of class or a defensive gaffe was always likely to separate the two sides - and unfortunately for Cardiff it was the latter on both occasions in the first half.

A disastrous sequence of events presented the first to Long who converted his lobbed finish with aplomb, before Bluebirds centre-back Dekel Keinan - also partly at fault in the opener - foolishly tugged back Royals skipper Matt Mills to present the Irishman with his second from the penalty spot.

Cardiff wasted chances to get back in the game immediately after the restart while Noel Hunt hit a post for the visitors, and it was left for Jobi McAnuff to wrap matters up late on.

Reading are now 90 minutes away from the Barclays Premier League and an estimated #90million windfall but the 49-year wait continues for Cardiff, who lost to Blackpool in last year's final, and will see this season as a huge missed opportunity with the riches on offer, leaving manager Dave Jones' future in doubt.

How the Bluebirds could have done with hometown hero and talisman Craig Bellamy at the Cardiff City Stadium to add that missing bit of quality.

But the hamstring strain sustained early on at the Madejski Stadium ruled him out, while influential Reading duo Jimmy Kebe and Hal Robson-Kanu also failed late fitness tests.

As you would expect on home soil, the onus was on Cardiff to force the issue and they did that in the opening 15 minutes with Mills twice called up to deny Michael Chopra with timely blocks.

The deadlock was seriously threatened for the first time midway through the half as Jay Bothroyd's 20-yard strike was deflected narrowly wide by Zurab Khizanishvili with Adam Federici rooted to the spot.

But out of nowhere it was Reading who drew first blood in the tie courtesy of a poor piece of defending.

Keinan's attempted back pass struck Kevin McNaughton on the back of the head, taking the pace off the ball, and the onrushing Stephen Bywater could only see his attempted clearance unknowingly hit the hand of Long, who duly sent a perfect 20-yard lob into the empty net.

And the World Cup final referee got it spot on again in the 44th minute as Keinan foolishly tugged at the arm of Mills from McAnuff's corner, leaving Long to send Bywater the wrong way with the resulting penalty.

On-loan Arsenal wide man Jay Emmanuel-Thomas wasted two great openings to reduce the arrears within 10 minutes of the restart, chances which came in between Hunt hitting a post from Long's cross with the goal gaping.

Bluebirds boss Jones introduced Jason Koumas and Jon Parkin in the hope of changing things, and the latter headed a chance just wide.

Hunt then fired across goal when he really should have put the outcome beyond doubt, but that was left for McAnuff in the 84th minute as he waltzed through the Cardiff defence.

The goal signalled Cardiff's dejected home support to leave in their droves while Reading's away contingent were left planning a trip to Wembley.