Swansea made South Wales derby history by thrashing Cardiff 4-0 to secure the first league double in 110 years of the fixture. 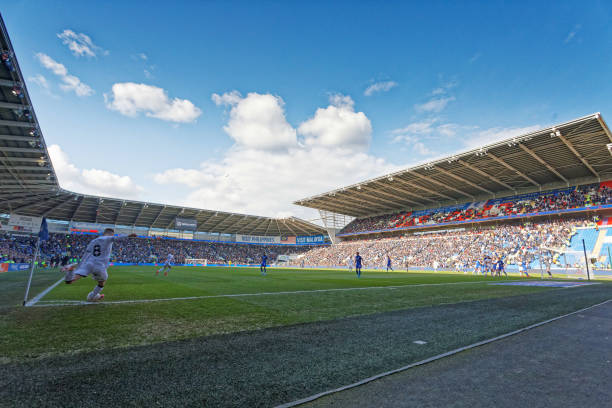 A Michael Obafemi brace and goals from Ben Cabango and Hannes Wolf rewarded Swansea's supremacy in this one-sided Sky Bet Championship contest in the Welsh capital.

It was a particularly sweet moment for Wales defender Cabango, who was born and raised just a few miles away from the Cardiff City Stadium.

Swansea won the reverse fixture in October 3-0, a result which paved the way for Mick McCarthy's departure and the appointment of Steve Morison.

The peculiar statistic that no side had ever won both matches in the same league campaign would not have provided Swansea with confidence ahead of a game played for the first time at 3pm on a Saturday since 1991.

Cardiff had also taken 10 points from their previous four games but Morison chose to leave Rubin Colwill, a scorer for Wales in midweek, on the bench and Swansea seized the initiative from the start.

Russell Martin's side might have been ahead inside 25 seconds but Obafemi could not connect with Joel Piroe's pass over the top.

But Obafemi made no mistake with his second opportunity as Cardiff were cut open by Swansea's slick approach play.

Obafemi played a delightful one-two with Jamie Paterson and the former Southampton striker slotted an excellent return ball past Alex Smithies in the Cardiff goal.

Tommy Doyle touched Cody Drameh's cross into the path of Jordan Hugill but the striker's scuffed shot was deflected wide.

The first flashpoint came after 25 minutes when Joel Latibeaudiere directed a kick at Ryan Wintle that did not go down well the Cardiff midfielder.

Both players were lectured by referee Joshua Smith but escaped without sanction.

Swansea created the better openings as the first half wore on.

Piroe, operating in a deeper role and causing Cardiff huge problems with his clever movement, fired over and Perry Ng produced excellent covert tackles to deny Wolf and Obafemi.

Wolf and Doyle were both booked as the temperature began to rise and Cardiff did manage to create an opening for Joe Ralls that Swansea goalkeeper Andy Fisher comfortably dealt with.

Cardiff pushed forward after the restart and the unmarked Hugill lost the chance of an equaliser by failing to control Aden Flint's header.

Colwill's belated introduction gave Cardiff some attacking impetus but Wolf put the issue beyond doubt with a far-post header after 78 minutes.

Four minutes later Obafemi lashed home Wolf's pass and Swansea had equalled their biggest win in the fixture since a 5-1 victory in December 1949.