West Bromwich Albion moved top of the Championship by thrashing a woeful Cardiff City 4-0 in the Welsh capital. 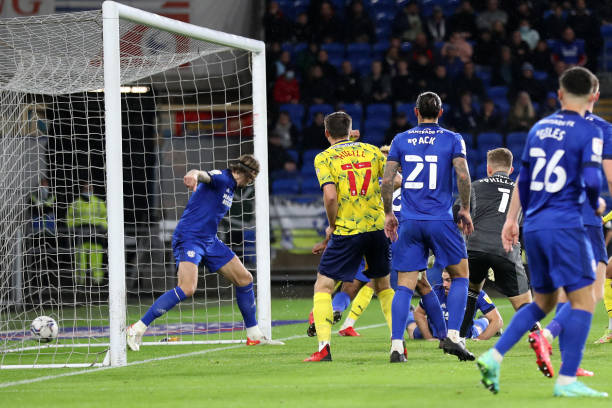 Karlan Grant hammered Albion ahead in the fifth minute with a powerful effort from the edge of the penalty area.

Curtis Nelson's calamitous own goal doubled Albion's lead on a night when the Cardiff fans booed their side off the field at half-time and full-time.

Albion are top of the Championship with 22 points after their stroll in south Wales, while Cardiff slip to 16th after a fourth straight defeat that prompted an angry reaction from the home fans.

Cardiff boss Mick McCarthy took a pragmatic approach to try to halt the worst run of form he has experienced as their manager, selecting five central defenders as Mark McGuinness and Ciaron Brown were deployed as wing-backs.

Cardiff came into this contest having lost four of their past five league games - including a 5-1 thrashing at Blackburn last time out - one more defeat than they had endured in their previous 26 games under McCarthy. It was soon clear their fortunes would not change here.

It took West Brom less than five minutes to open the scoring with Grant given too much time and space on the edge of the penalty area as he was able to shift the ball onto his right foot and fire into the bottom corner.

It capped a wonderful few days for Grant, who scored twice in Friday's win over QPR, having previously only scored once in his past 27 appearances.

Callum Robinson, one of two players recalled by Baggies boss Valerien Ismael, saw a shot blocked and Jake Livermore fired wide as the visitors looked much the sharper side throughout.

Robinson's effort on 26 minutes was goal-bound but Cardiff goalkeeper Dillon Phillips tipped the ball around the post.

The Bluebirds, by contrast, failed to muster a shot on target until the 35th minute when Leandro Bacuna's header was cleared off the line by Darnell Furlong.

Robinson again tested Phillips before the break, with Cardiff's only other effort on goal in the first half resulting in James Collins volleying over after a Marlon Pack long throw.

Cardiff went two behind within 10 minutes of the restart as they failed three times to clear a Grant cross which culminated in Curtis Nelson smashing the ball into his own net, off the post.

That prompted an angry reaction from the Cardiff fans who made their displeasure clear as West Brom threatened a third, with Jordan Hugill firing just wide.

The third goal arrived with 15 minutes left as Mowatt smashed home a half-volley that was fully merited on a night West Brom were a class above the hosts.

Cardiff's woeful display was completed when they were caught on the break and substitute Grady Diangana crossed for Phillips who could not miss from close range as Albion powered to the top of the table.