Apart from being part of a brutal exhibition of passing and finishing from Manchster City there was nothing for Cardiff fans to enjoy about that performance.

I called it 'depressing' on social media yesterday. Thinking back my mind hasn't changed. I don't think I enjoyed one bit of the game as a Cardiff fan. If you alter your thinking a little and appreciate the devastating way Man City created space and movement to score their goals then there was some enjoyment to be had but you really needed to be a Man City fan or a neutral to have walked away with any sense of satisfaction.

After giving Arsenal a game, Chelsea a scare the most we gave Man City was a run for being the wettest City in the UK. It teemed down all game and that added to the gloom. 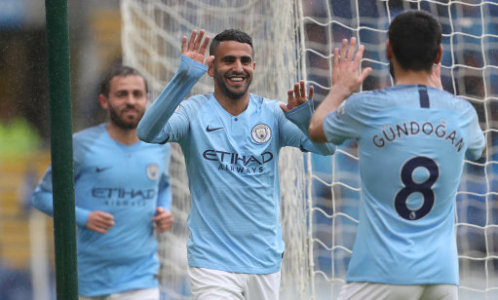 The home support was excellent, backing the side as they tried to compete on a stage against players who individually are each worth more than our whole squad.

We kept it at 0 - 0 for half an hour but Aguero on his 300th appearance for Man City opened the scoring after a slick passing move. Bernardo Silva's flciked header found the back of the net two minutes later before Gundogan scored the goal of the game with a shot from 20 yards on the stroke of half time.

City did have a decent chance in the first half. Danny Ward found space to shoot but it was straight at the keeeper.

Joe Ralls as booked for a bad tackle on Gundogan and as the second half started Lee Peltier was stretchered off with a dislocated shoulder.

Peltier was in the side at full back with Bruno Manga moving into the middle alongside Sean Morrison, there was a start for Greg Cunningham as well with Sol Bamba and Joe Bennett dropped to the bench.

The City defenders were the busiest players on the pitch because the midfield and non existant atttack barely touched the ball.

Riyad Mahrez, on for Aguero, tapped in a 4th after another devastaing move that left City chasing shadows before Manga's failure to clear after good work allowed Mahrez a second and Man Cty's fifth.

Cardiff City's effort to change the game saw Ken Zohore given 30 mins to make a difference and I think he may have touched the ball twice such was the rarity of possession tha City had going forward.

Like last week at Chelsea the top sides have the ability to get the ball of you as soon as they lose possession and this was highlighted to me yesterday when City had the chance of a break and four Man City players had closed down Junior Hoilett and regained the ball before Hoilett had made an impression on the Man City half. When it was the other way around the ball could move from one end to the other and be in the back of the net without a Cardiff player getting a touch.

Football League players usually gain their Premier League experience in teams alongside established establised top flight players. Apart from Harry Arter and maybe Camarsa (from La Liga) we have an over achieving EFL squad playing in the best league in the world.

Next up we face Burnley. It's the Super Sunday game next week with a 4pm kick off. Burnley had been suffering after a poor start that was maybe influenced by the Europa League but they are out of that competition now and whacked Bournemouth 4 - 0 yesterday.

Cardiff have to get something from that game and the next home game after that v Fulham. Becuase our next two aways are at Spurs and Liverpool.

I understand 'Keep the Faith', 'Support the Boys' etc but from a realists point of view we are in danger of ending the first 1/4 of the season without a win and no matter who you support it's not a positive experience.

We earned the right to be here, now we need to earn the right to stay here. And that means starting to win some games.