Striker Mason was handed a first start in six weeks with Jones left out as he discusses a proposed move to a club in Dubai.

The former Plymouth man made the most of it, sliding home in the 59th minute as he reacted quickest to Craig Noone's blocked shot to overtake Jones as Cardiff's top scorer this season. 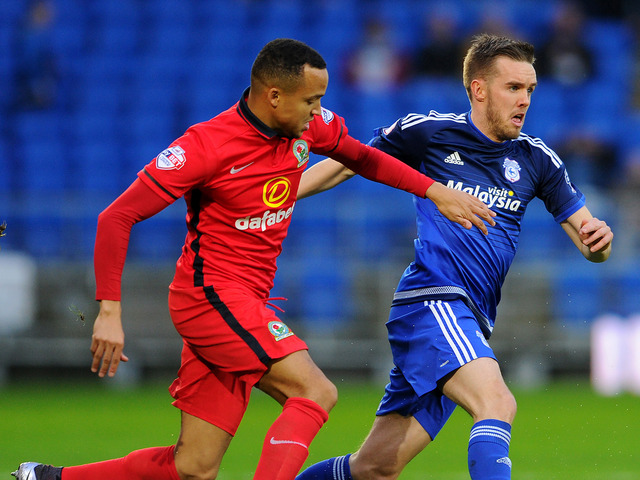 This was a drab contest but it arrested Cardiff's three-match winless run over the festive period and made it three defeats in a row for Blackburn, whose best chance fell to Jordan Rhodes.

Jones' absence was the main pre-match talking point, with Cardiff confirming the Trinidad and Tobago international was in talks over a move overseas having been told he would need to take a pay cut if he wanted to remain in south Wales when his current deal runs out in the summer.

In truth there was little during the 45 minutes to take the spotlight away from the absent target man, such was the paucity of goalmouth action as the two sides cancelled each other out.

It took nearly 20 minutes for a genuine sight of goal, with Anthony Pilkington forcing a sharp save from Rovers keeper Jason Steele with a curling, dipping effort.

Joe Ralls fired over from the edge of the box from some decent Cardiff build-up, while Shane Duffy made a crucial block to prevent Mason converting a Pilkington cross at the near post.

Blackburn were struggling for fluency, but Rhodes nearly created a goal for nothing as he rolled Lee Peltier but could not beat David Marshall from an acute angle.

The visitors then felt they should have had a penalty when Hope Akpan went down as Bruno Manga appeared to tug his shirt, but referee Andy Woolmer gave the midfielder a yellow card rather than a spot-kick, deeming he had gone down too easily.

The second half could only be an improvement, and Pilkington came within inches of finding the opener when Aron Gunnarsson drove the ball across the Blackburn six-yard box three minutes after the resumption.

At the other end former Cardiff man Craig Conway selfishly dragged a shot into the side-netting when he had three attackers waiting for a cross, while Duffy's header from a Ben Marshall cross was sent straight into the grateful arms of David Marshall.

Then came Mason's winner. Noone cut inside his man and when Duffy's block went loose, the striker was first to react and knock the ball into the empty net with Steele still recovering from his attempt to save the initial shot.

Paul Lambert threw on Nathan Delfouneso to try and chase an equaliser, but they never looked likely to recover and earn a point.

Instead Cardiff should have added to their tally. Tony Watt waltzed away from three defenders but could not beat Steele as the keeper flew off his line.