Derby's Wayne Rooney laid into the officials after his side missed the chance to move back to within five points of safety in the Sky Bet Championship table after a 1-0 loss at Cardiff. 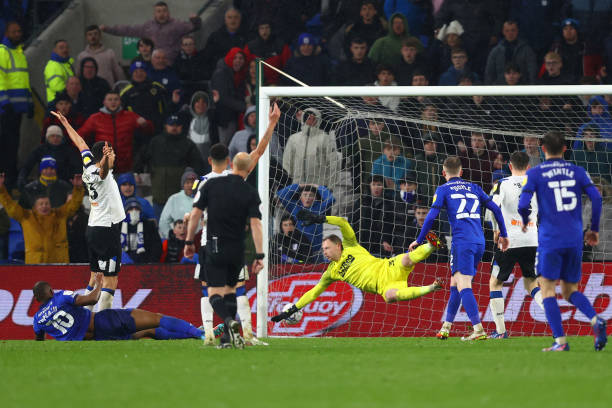 The winning goal came 85 minutes into the game at the Cardiff City Stadium, as Uche Ikpeazu steered home Perry Ng's cross to earn the Bluebirds - who had earlier hit the woodwork twice - all three points.

But the Rams made it known they felt aggrieved about the build-up to the goal. Firstly, Festy Ebosele was caught by Alfie Doughty on the edge of the hosts' box, yet play continued, while Ikpeazu appeared to pull back Curtis Davies as he swept in the winner.

Though it was unclear which foul Rooney was referring to, speaking to Sky Sports' Jonathan Oakes, he said: "I think it is a clear foul. We have to defend better afterwards, obviously I know that. But it's unacceptable. Do we bring VAR in? It's clear that doesn't work - we've seen the handball in the Everton game. I don't know where we go.

"I have been [unhappy with the officials] for the majority of the season. It is very frustrating because we've got a group of very good, young, honest players who have given everything and we're getting spoken down to and not getting decisions."

Cardiff move up to 18th, with a healthy 16-point advantage between themselves and the bottom three, while Rooney's men remain in 23rd, eight points from safety.

On Saturday afternoon, they travel to Oakwell to face 22nd-placed Barnsley, in a game that could prove pivotal in the race for survival.

Though Derby had hauled themselves away from the wilderness with a bright spell at the start of 2022, momentum had somewhat dipped over the last month or so, with five defeats from the last eight games dealing their survival hopes a hit.

That meant the trip to South Wales carried significantly more importance, particularly given the fact the Bluebirds - led by Steve Morison, whose permanent contract until next summer was confirmed after the final whistle - side were, mathematically, not out of the woods themselves, either.

There was a good tempo to the game for extended parts of the first half, and though it ended without a shot on target for either side, Tommy Doyle registered the best chance when he chested down a pass and hit a sweet dipping effort that came back off the underside of Ryan Allsop's crossbar.

Less than 15 minutes after the restart, the Rams spurned a glorious chance to take the lead. Ravel Morrison leapt to head Festy Ebosele's cross goalwards, which Alex Smithies pushed onto the post, with Luke Plange unable to apply the finishing touch to Colin Kazim-Richards' square ball at the back post.

As the precious time ticked by without a goal for either side, it was a case of simply not losing the game for Derby, for who a point would have been better than none. But three minutes after Joe Ralls cut in off the right unchallenged and rattled the crossbar, Cardiff delivered the decisive goal.

Ng received the ball on the left flank, after it had just about been kept in play, and swung in a superb cross, with Ikpeazu able to hold off the experienced Curtis Davies and direct the ball over the line. The visitors immediately protested that the frontman had fouled his marker, though appeals were ignored.