Sol Bamba’s second-half header ensured Cardiff kept up the pressure on league leaders Wolves with a 1-0 win over Hull in the Sky Bet Championship on Saturday evening.

Though neither side imposed themselves on the game early on, it was Hull who had the game's first chances, firstly when Neil Etheridge spilled Kamil Grosicki's cross, before Nouha Dicko hit the post from close range.

But Neil Warnock's men burst out of the traps in the second half and got themselves in front when Bamba powered a header across Allan McGregor after Anthony Pilkington had flicked Lee Tomlin's cross to the far post (57). 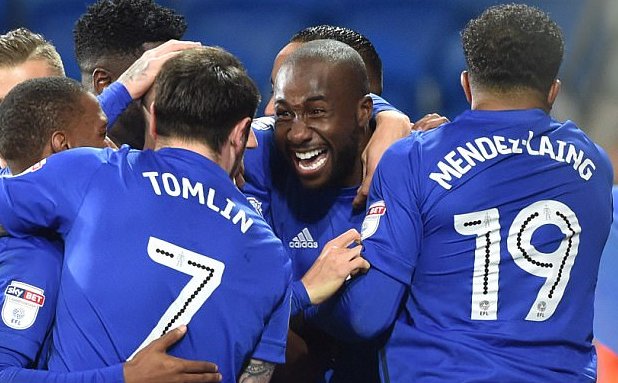 Hull's threat petered out thereafter, meaning the goal proved to be the winner, leaving Cardiff just four points behind Wolves, while Hull suffered their first defeat under Nigel Adkins and remain in the relegation mix in 19th.

With closest rivals Wolves and Bristol City having already registered wins this weekend, the pressure was on the Bluebirds, particularly after their 2-2 against Reading on Monday evening.

They went behind first that evening, and went close to repeating that on 27 minutes when Dicko turned Bamba and watched as his shot cannoned off the base of Neil Etheridge's near post.

Tomlin created two decent openings as the Bluebirds grew into the game; first smashing a volley over the bar, before he stung the palms of McGregor with a low drive moments before the break.

Four minutes into the second half, Junior Hoilett missed a golden chance to break the deadlock when he headed wide Bamba's knockdown wide from a yard out, but eight minutes later they finally made their dominance count.

Pilkington's smart flick from Tomlin's whipped cross into the area took the ball to the far post where Bamba failed to break stride before nodding down and past McGregor, though replays suggest there was a hint of offside in the build-up.

Hull boss Adkins threw on top scorer Jarrod Bowen in a bid to force an equaliser, but the sturdy Bluebirds' backline stood firm and held to what could be an important three points in their promotion push.

Man of the match - Sol Bamba

After a slightly shaky start, much like Cardiff as a whole Bamba grew into the game and proved to be the match-winner. A well-taken goal from the rock at the heart of the Bluebirds' defence.