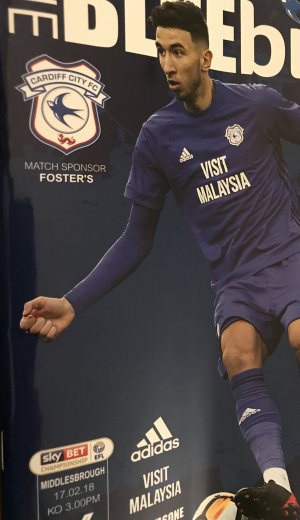 Cardiff moved back into the Sky Bet Championship automatic promotion places with a 1-0 home victory over Middlesbrough, writes Sky Sports..

The hosts' fourth win in six matches was enough to move above Derby, who are not playing this weekend, and Aston Villa, who were beaten by Fulham.

Middlesborough fell to 10th in the table and are now four points from the play-off places.

Chances were hard to come by for both teams in the opening 20 minutes as Cardiff looked to break down a Boro side which had won three of their last four away matches.

Junior Hoilett had a chance to add to his 11-goal tally when he linked up with Callum Paterson, but he could only fire his effort high and wide.

But Cardiff's muscle overpowered Tony Pulis' stubborn side after 34 minutes.

Hoilett swung a dangerous delivery towards the far post after Kenneth Zohore was hauled down on the edge of the area.

Morrison towered over Ben Gibson to guide the ball past Darren Randolph for a 1-0 lead.

Joe Ralls had the chance to make it two when he battled his way past Grant Leadbitter to fashion a shooting chance, but his left-footed effort flashed wide.

Middlesborough almost levelled after 54 minutes when Leadbitter sparked a swift counter-attack with an inch-perfect pass to Stuart Downing.

The former England winger charged towards Neil Etheridge's goal, but failed to crown his 300th start for Boro with a goal as he dragged his effort beyond the post.

The hosts then had a chance to guarantee three points when Morrison flicked the ball on from a Paterson long throw.

Hoilett looked certain to add a goal to his assist, but Randolph spread himself to deny the Canadian from point-blank range.

Substitute Loic Damour volleyed an effort straight into the clutches of Randolph in the final 10 minutes and the hosts held out to record their 15th clean sheet of the season.