Neil Harris enjoyed a win on his first game in charge at CCS.

A wet and chilly evening where quality football was at a premium was lit up by Gary Madine's flick that sent Leandro Bacuna into enough space to rocket a shot into the roof on the net from a couple of yards after just 11 minutes. 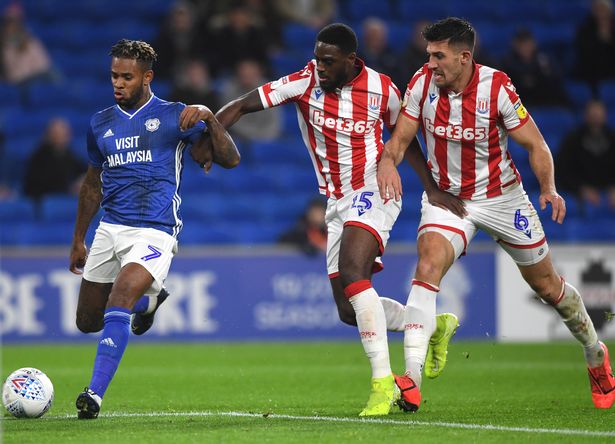 Lee Peltier's throw in was miscontrolled by Bacuna but the Curacao international spun and ran into space and was found by the deft flick by Madine to score his first Cardiff goal. Bacuna also saw a second half shot go inches wide as Cardiff made the better chances in a game where Stoke dominated possession.

Cardiff were stretched at times but defended resolutely and thanks to a blunt Stoke attack managed to win the game. Lee Tomlin's first half run and cross saw Madine almost get his first Cardiff goal but Jack Butland responded with a reflex save to deny him.

In the second half Lee Tomlin forced Butland into another quality save and the follow up was blocked. But while Cardiff managed some decent chances thery also lumped the ball forward out of defence time and time again with aimless punts that briefly relieved pressure but with Madine and then Bogle unable to hold the ball up if it went near them it soon came back towards the City box.

But with Stoke totally useless in front of goal the early Cardiff strike proved to be a winner. The visitors looked a threat with Joe Allen and Tom Ince on the pitch but for all their running around they had no outlet and their striking threat was non-existant.

Cardiff go to Forest on Saturday for a tougher test than tonight looking for a first away win of the season.