Joe Ralls' sixth goal of the season from the penalty spot after 53 minutes appeared to have piled further misery on Zola. 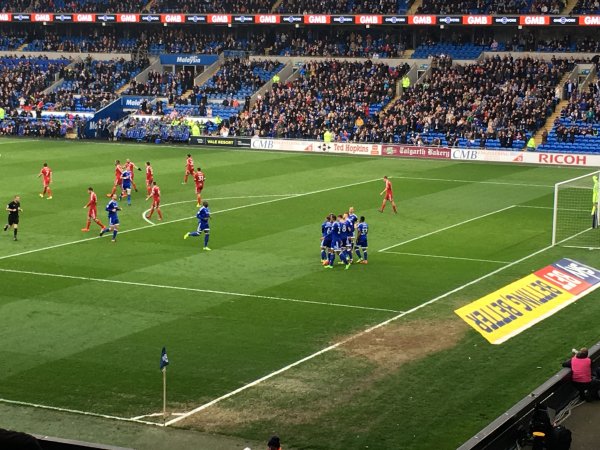 But Jutkiewicz rescued Birmingham when he headed Che Adams' cross goalwards, the ball inadvertently coming back off the burly striker from Allan McGregor's save.

Zola admitted Birmingham were in a relegation battle following their lame midweek defeat to Wigan.

The embattled Italian was seeking an urgent response after winning only two of his 16 league games since replacing Gary Rowett in December.

Birmingham started in confident fashion and Emilio Nsue's surge down the right flank ended with Craig Gardner forcing a save from McGregor low to the Cardiff goalkeeper's left.

But Cardiff soon began to probe with Ralls volleying wide and Greg Halford twice having shots blocked in a crowded Birmingham penalty area.

Birmingham's neat approach play was often let down by a careless final touch, summed up when Jutkiewicz delayed his shot and Morrison was allowed to make a sliding tackle.

Cardiff had the clearer chances as the first period drew to a close, with Anthony Pilkington sending his free-kick on to the roof of the net and Tomasz Kuszczak electing to punch Joe Bennett's powerful drive clear.

Morrison then wasted the best chance of the half when he headed wide Junior Hoilett's free-kick from a few yards out.

Birmingham wanted a spot-kick when Krystian Bielik hit the ground, but the theatrical nature of the fall earned the Pole a yellow card rather than a penalty.

Referee Peter Bankes, however, had no hesitation in pointing to the spot eight minutes after the re-start when Ryan Shotton was adjudged to have grappled Sean Morrison to the floor at a Cardiff corner.

And Birmingham's frustration was compounded as Kuszczak almost stopped Ralls' kick with a firm hand to his right.

Zola responded to falling behind by abandoning his three-man central defence and sending on Adams as a second striker to partner Jutkiewicz in attack.

And Jutkiewicz prevented an 11th defeat in 16 games with the late far-post leveller which gave Zola some much-needed cheer.