Cardiff and Blackpool both saw their progress towards mid-table of the Championship slowed after a 1-1 draw left them sharing the points in the Welsh capital. 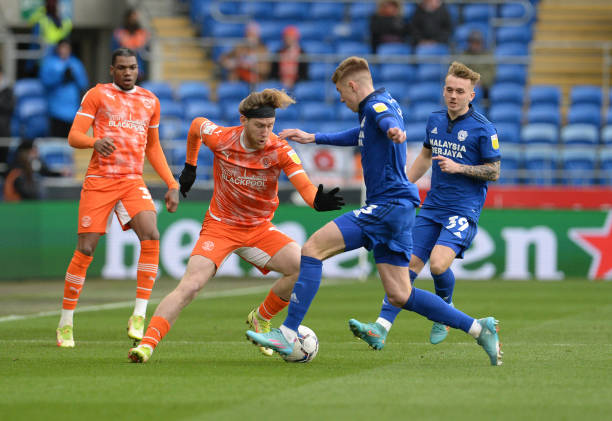 An early goal by Tangerines striker and captain Marvin Ekpiteta was cancelled out by a Joel Bagan strike for the Bluebirds shortly after half-time in a scrappy encounter at Cardiff City Stadium.

Blackpool have still only lost once in the league since the turn of the year in what has been a significant improvement for Neil Critchley's side.

Cardiff, meanwhile, were looking for their fourth-successive home win to widen the gap between themselves and the relegation zone, which stood at 14 points going into the contest.

But, despite an improved second-half spectacle which saw both teams display plenty of attacking intent, neither side could find a winner.

If this was a meeting between two in-form sides, there was very little on show in the first-half to suggest as much.

Blackpool, with the strong wind at their backs, dominated, with Josh Bowler and Charlie Kirk causing the Bluebirds problems down both flanks.

Every time the ball was sent across the Cardiff penalty box, the home defence looked vulnerable, with the opening goal just unsettling a hesitant backline even more.

There was little change to the pattern up to half-time.

Kirk almost increased the Tangerines' lead in the 18th minute, forcing Bluebirds goalkeeper Alex Smithies to tip his long-range effort around the post.

Cardiff threatened sporadically on the break with right wing-back Cody Drameh, on loan from Leeds, providing rare moments of urgency and penetration.

But chances for the home side were limited. Striker Jordan Hugill had two sniffs of goal in the 20th and 34th minutes - a ricocheted shot and then a close-range header, while off balance - but neither looked likely to make the net bulge.

Cardiff began the second half with far more purpose, fizzing passes around in the final third for the first time in the game, and in the 49th minute they hauled themselves level in simple fashion.

Drameh made progress down the right flank and his low cross was side-footed home from six yards by the unmarked left wing-back Bagan.

Just before the hour mark, Bagan should have had a second when a more hopeful Drameh cross was allowed to bounce across the Blackpool box into his path, but his half-volleyed effort on goal was dragged well wide.

While Cardiff were sharper and hungrier in every department, the visitors began to match them for workrate and threat as the game went into its final quarter.

But there was to be no breakthrough at either end, much to the frustration of both sets of fans.