Harris' first encounter with Millwall since he stepped down as manager of the club in October was going to plan when Aden Flint put the Bluebirds in front just before the hour. 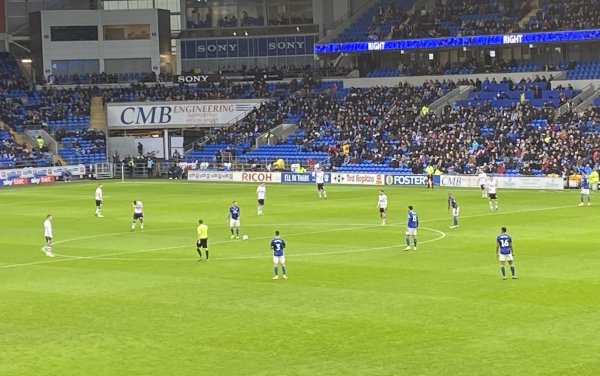 But Millwall quickly drew level thanks to leading scorer Wallace's ninth goal of the season.

The 1-1 draw means Harris' promising start to life as Cardiff boss continues, with just one defeat coming in eight games since he took charge in the Welsh capital.

It is a similar story for Harris' successor at Millwall, Gary Rowett, who has lost only two of his 11 games at the helm.

Harris is the all-time leading scorer at the Den, where he had two spells as a player before taking over as manager in 2015, yet insisted before this game that his Millwall connections were irrelevant.

In truth, a player with Harris' ability to sniff out a goal would have been welcome on the pitch during a first half which was seriously short on quality.

Millwall offered marginally more threat, with Wallace drawing a comfortable save from Neil Etheridge before feeding Tom Bradshaw on a second burst up the pitch.

The visiting bench screamed for a penalty as Bradshaw tumbled under Curtis Nelson's challenge but referee David Webb waved play on.

Bartosz Bialkowski was called into action for the first time just seconds before the half-time whistle, when Robert Glatzel made space for a powerful 20-yard drive which was beaten away by the Millwall goalkeeper.

Bialkowski was required to save Millwall again early in the second half, stretching to his left to push Lee Tomlin's fabulous half-volley wide of the post.

The Poland international was again called into action to save Joe Bennett's free-kick, before a Millwall corner ended with a Shaun Hutchinson shot that was blocked by Nelson.

Suddenly the game had sparked into life.

The deadlock was broken on 59 minutes, with summer signing Flint tapping in his third Cardiff goal from a couple of yards out after Marlon Pack flicked on Bennett's right-wing corner.

Cardiff were not ahead for long, however, as Wallace struck just four minutes later.

Harris would have known what was coming as Wallace placed the ball around 30 yards from goal, for the former Wolverhampton Wanderers winger was one of 10 players in Millwall's starting side he brought to the club.

But there was nothing Cardiff could do to stop Wallace's superb set-piece as the ball flashed into the top corner of the net.

Both teams huffed and puffed late on, but the draw was about right and ensures they remain side by side in mid-table.