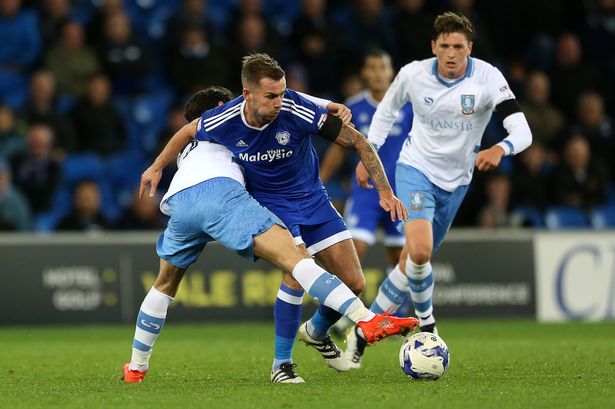 Sheffield Wednesday moved into the Sky Bet Championship play-off places by coming from behind to draw 1-1 and ensure Cardiff did not make it two wins from two under Neil Warnock.

The Bluebirds made an energetic start and were rewarded when Peter Whittingham gave them an early lead with a superb free-kick.

A win would have moved the Welsh club out of the relegation zone but the visitors had the better of the second half and deservedly levelled through Daniel Pudil's first goal since December.

But the bad news for the Owls was an injury to goalkeeper Kieren Westwood, who was forced off in the first half having had treatment following a wayward clearance.

Rickie Lambert tried his luck from the kick-off, and Westwood was forced to back-pedal to tip the ball over the bar.

But there was nothing the Wednesday keeper could do when Whittingham put the hosts ahead in just the ninth minute.

Sam Hutchinson brought down Craig Noone on the edge of the area, and Whittingham stepped up to curl the free-kick into the net.

The Owls recovered with a good spell of possession but they looked uncomfortable dealing with set-pieces and it was a weakness Cardiff were prepared to prey upon.

It did not help their cause when Westwood needed treatment having pulled up after taking a goal-kick and he had little respite.

Twice the Republic of Ireland international came to try to claim long balls into the area, and twice he got nowhere near.

The third delivery, courtesy of Aron Gunnarsson's long throw, ended with Lambert controlling and swivelling in one movement, only to fire over with the goal at his mercy.

Westwood was soon gingerly walking off to be replaced by Cameron Dawson before the visitors had their best spell of the half.

Ben Amos in the Cardiff goal had not had a save to make during the opening half-hour, but he was called into action to hold Gary Hooper's volley and to parry Adam Reach's shot round the post.

Yet Cardiff should have gone in with their advantage doubled as Sol Bamba and Sean Morrison failed to convert from close range in a goalmouth scramble from another Whittingham set-piece.

Owls boss Carlos Carvalhal sent on Fernando Forestieri for Almen Abdi having seen his side create little despite having 70 per cent of possession.

They briefly thought a penalty was set to come their way when Pudil got away from Noone and went down as he attacked a deep cross, but the flag was up for offside.

At the other end Junior Hoilett forced Dawson into a sharp low save after bringing down a loose ball and getting away from two defenders.

Wednesday drew level 10 minutes into the second half when Hooper found space down the right side of the area and Pudil converted from close range.

The visitors took control and Hooper fizzed a strike narrowly over the bar from a Forestieri lay-off as the pressure increased, but neither side could find a winner.